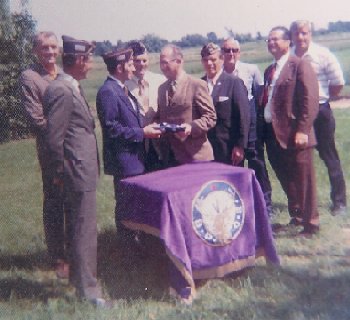 The Clifton Park Elks Lodge was originally founded and chartered in 1971 on a small farmhouse in the Jonesville area of Clifton Park. The farmhouse was the family home of Leon Teresko, one of our lodge's charter members. To the benefit of our lodge, Leon has remained continuously active in the lodge throughout the years and has served in many different capacities. In 1972 a flag pole dedication was held at the lodge. This event was published in a local newspaper and included the photo shown above. The article that accompanied this photo reads as follows: "A PATRIOTIC OCCASION - Benevolent and Protective Order of Elks 2466 of Clifton Park was presented a flagpole and flag for its new quarters on MacElroy Road by Henry Cornell Post 237, American Legion, of Ballston Spa during ceremonies held July 3. Legion Commander Larry DuBois is shown making the official presentation to Exalted Ruler Casimer Kakulski. Others, left to right, are John Matthews, Legion First Vice Commander; David Stack, Elks' Lecturing Knight; Roger Smith, Legion Historian; J. George Fagan, Leading Knight; Frank Russitto, Past Commander; James Capasso, Past County Legion Commander and Loyal Knight, and Donald Regan, Elks Secretary." As Clifton Park's membership grew, the walls of the building would unfortunately not expand on their own to keep up with the needs of the lodge. So, in 1976 a group of talented members assembled and proceeded to attach an additional banquet room on the south side of the original building. After the addition was completed, membership increase was on the rise and sure enough it did not take very long before discussions of further expansion began to surface. Only this time, with increased regulations and newer technology, the task would not be as uncomplicated as it was for the first expansion. In 1994, after several years in planning, a new expansion was finally completed giving us the facility we have enjoyed to this present day. This of course was not accomplished but for the dedication of many hard working members. Today our lodge continues to thrive and be a contributing organization within our community with many of our members not only serving our lodge programs, but also the programs of our district organization and our state association. We hope that you will someday have the opportunity to visit our lodge and meet some of our members.