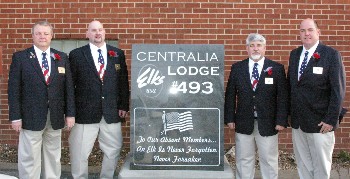 In April 2013 this Memorial Tribute was erected on the north side of the lodge in honor of and to recognize all Elks who have passed through these doors and will come no more. As our motto reads "The faults of our members we write upon the sands, their virtues upon the tablets of love and memory" what better way to love and remember our departed members? On Memorial Day, Flag Day, and upon the death of a member in good standing the tribute will also display flags in honor of our departed.