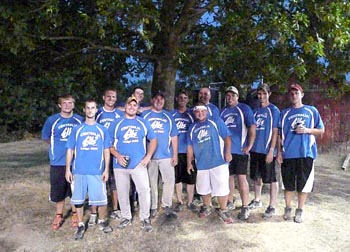 Elks Lodge #493 did not field a spring team this year! The Lodge is looking at sponsoring a team in the late summer and/or fall leagues.

Elks Lodge #493 is once again sponsoring a local men's Softball Team. They played on Tuesday and Thursday evenings and were coached by Jason Heorchler.

The Elks' Men's Softball Team completed their 2012 regular season playing 15 games with a record of 7 wins and 8 losses. Pictured at that game are Adam Anderson, Dusty Arnold, Jim Bateman, Brandon Burleyson, Greg Cavitt, Dusty Garren, Jason Heorchler, Steve Hodges, Stew Miller, Matt Murphy, Brandon Tate, & Eric Wilkinson; not pictured are Josh Niederhoffer, and George Godoyo. James Hill and Josh Milbourne substituted in during a pinch. Thanks to the club and membership for sponsoring & supporting the team and to the members and friends that played. We all look forward to playing again next season, thank you.
Coach, Jason Hoerchler

Elks Lodge 493 voted to sponsor a local men's Softball Team for the members and friends. ER Tony Korzenewski started selecting members and named Jason Heorchler as head coach. If you have any questions or would like more info e-mail the lodge at elks493@aol.com