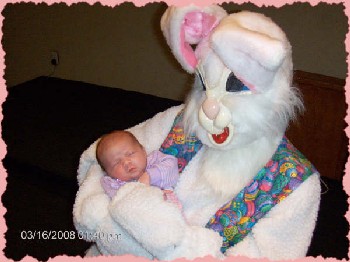 Our Easter Party for the Kids will be held Sunday, April 10th at 2:00 pm in the Lodge room. Eggs will be hidden for the kids in different age groups and refreshments will for every one will be served after the Easter Egg hunts. Pictures will be available with the Easter Bunny during the party.

On Sunday March 21st the dreary weather did not keep the Easter Bunny from making his annual visit to Centralia Elks Lodge #493. The Bunny was greeted by Treasurer Rosanna Perkins and Vice President Debbie Mitchell who accompanied him on a visit throughout Centralia.
The Easter Bunny made stops at every nursing home in Centralia, including an adult day care center greeting residents and passing out individual packs of Kleenex.
The Bunny then visited St Marys Hospital where his mere presence brightened the day of young and old.
The Easter Bunny then returned to the Elks Lodge to begin his work. Many eggs were hid throughout the upstairs of the Lodge that was divided into age categories.
Downstairs the little children wearing their Sunday best anxiously awaited their turn to be called upstairs for the Hunt.
The sly Bunny slipped down the back stairs and hid while the children were busy hunting the eggs that were previously filled by the Elks Members and Lady Elks with candy and money. Each age group had a special egg which entitled the owner a stuffed animal.
When it seemed to quiet down the Bunny returned upstairs and was greeted with mixed emotions. You either LOVE the Easter Bunny or you HATE the Easter Bunny---
The remainder of the day was spent with the Bunny posing for photos with the children and some of the Elks Officers, eating pizza, cookies and drinking soda.
As the children left with their findings they each received a photo with the Bunny and a special Easter Basket made by the Centralia Lady Elks.
A good time was had by all!!!

The Centralia Lady Elks began the month of April by a visit from the Easter Bunny. The Easter Bunny Showed up April 05th at 10:00 a.m. and wanted to visit the area. Treasurer Rosanna Perkins, Vice President Debbie Mitchell, and Trustee Helen Donoho lead the Easter Bunny to many stops. They visited a home on Fourth Street, and moved on to all nursing homes. The Easter Bunny then went to the Hospital, visiting Red Langenfeld and Paul Ritter. Then on to the Peds Unit to visit with a baby and a 16 year old young man. It was a very good experience for all.
We then followed the Bunny to the Lodge and the Bunny proceeded to hide eggs ... Then the Hunt began. There were 26 children that hunted for eggs. Many found money as well as candy and other surprises. The Easter Bunny made a final appearance. Everyone had the opportunity to have their photo made with the Bunny. The Bunny left and pizza and cookies were served to all. Sherry and Lou Logullo's granddaughters Gabriella and Isabelle entertained the guests with several numbers played on their violins. Each person attending the party received a basket. What a Day!

There were 28 children as well as their parents and some grandparents present on Sunday March 16th to find Easter Eggs, meet the Easter Bunny and have their pictures taken. The kids were separated into 4 groups based upon their ages. Newborn through 11 month olds, one to two year olds, three to six year olds, and finally the seven through eleven year olds. They then hunted Easter Eggs in designated areas for their age group, Easter Eggs were counted and prizes were awarded. Entertainment was provided by two of Sherry and Lou Logullo's granddaughters, both presented violin solos.
AND THEN..... The Easter Bunny arrived. There were several children who hugged, some that gave a high-five, and still others who were just happy to see the Easter Bunny. Everyone had an opportunity to talk to and get their picture with the Easter Bunny and received an Easter Basket.
Pizza, cookies, and beverages were served to all who attended. It appeared as if everyone enjoyed the festivities, had a good time, and got plenty to eat.