The History of the Copper Elk of Prescott Lodge

The Copper Elk was given to Lodge #330 by Charlie Clark, son of Senator Tom Clark, at a special celebration in 1905. J.C. Forrestwas exalted ruler and among the many Elks who attended the ceremony. JuliusJacoby, a prominent Prescott business man, who also remembers the occasion. Smelter Supt. Taylor of United Verde Mine made the presentation, and then the one- ton graceful copper elk was hoisted to its proud perch atop the Elks Temple. The Copper Elk was appraised at $1,200 in 1905. Cast from copper mined in Jerome and cast in a bronze foundry in the east. It has long been a landmark in Prescott and a true symbol of the stability of its Brother Elks on the ground. 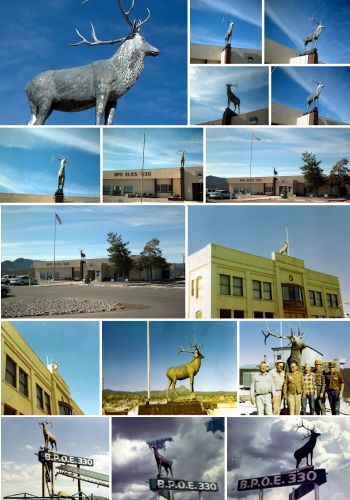 More Photos of the Copper Elk of Prescott Lodge

"Bill," the stately elk, is a Prescott landmark: Part I

"Bill," the stately elk, is a Prescott landmark: Part II

"When the elk flew back to Prescott." Caption courtesy of Richard Sims, former Director of Sharlot