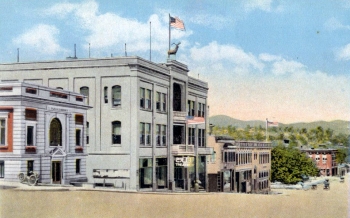 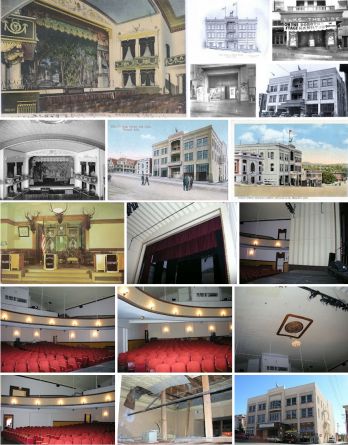 In the Beginning
A request published in the 1904 Prescott Daily Journal Miner urged businessmen of the city to attend a meeting on Feb. 12 to discuss a proposal from the Benevolent and Protective Order of Elks Lodge #330 to include and opera house, at an estimated cost of $15,000, to the building they were erecting on East Gurley Street.

"Prescott should have a good opera house and there never was a good chance before to have one for the money that this will cost, and if this chance is lost it will be a good long time before another such opportunity is offered," the newspaper notice stated.

The Elks Lodge's original plans did not call for a theatre. Entertainment-hungry residents raised the necessary funds and it was incorporated into the plans for the three-story building housing the lodge on the top floor, offices on the second floor and retail space on the ground floor.

The granite cornerstone of the building was laid on April 3, 1904, with an excited crowd in attendance. Architecturally, the building represents a transition from the Victorian commercial styles of the 19th century to the Sullivanesque and New-Classical designs of the early 20th century.

The February 10, 1905, Prescott Weekly Courier reported:
"The peer of that theatre is not found east of San Francisco until the great cities of the Mississippi Valley are reached, and even there our theatre is outclassed only as to size, for our theatre is about as perfect as the handiwork of man generally gets to be."

The grand opening of the Elks Opera House was Monday, Feb. 20, 1905. Actress Florence Roberts acted in the opening-night play, Marta of the Lowlands, written by Angel Guimera and billed as a romance of old Spain. The orchestra was composed of musicians from Prescott, Jerome and Phoenix. Opera boxes sold for $20.00 and general admission was $2.50. The box office proceeds totalled $1,225, leaving a $600 to $700 net profit for the Elks Lodge.

Prescott residents were equally proud of their opera house, around which they built their business and social lives. The location – one block east of the Yavapai County Courthouse Plaza and along the streetcar route – was ideal. Prescott was a convenient stopover for companies traveling between the larger cities to the east and west. Famed performers Sir Harry Lauder and John Phillip Sousa were among the notables who appeared at the Elks. Tom Mix and Tony the Wonder Horse were repeat performers at the theater.

The venue, which at the time boasted 900 seats and eight dressing rooms, also was used a great deal for balls, civic presentations and high school graduations. The acoustics were considered "superb."

The Advent of Cinema
The 1915 film masterpiece, Birth of a Nation, was shown at the Elks in 1916. During the silent film era, the theater had a small orchestra to provide the accompanying music. By 1929, the silent movie days were over, their demise owing to the Western Electric sound system. Movies were a mainstay of the Elks Opera House through the 1970s, with live performances returning in the 1980s.

Major physical changes started at the Elks Opera House in the 1940s, when the opera boxes and ornamental finishes were removed to accommodate wide-screen movies. The copper elk statue atop the roof and an inside box office also eventually disappeared as did a second set of balcony stairs.

Under New Management
The Arizona Community Foundation purchased the Elks Opera House in 1982. That same year the building was listed on the National Register of Historic Places. Yavapai College managed the theater from the mid-1980s until 1992, when the college's performing arts center was built. Prescott College succeeded as Elks manager and during its stewardship, the building benefited from many grant-funded structural repairs and equipment upgrades.

Article 1 of the incorporation document states: "The character of the affairs which the corporation initially intends to conduct includes, but is not limited to , fundraising for the benefit of the Elks Opera House and Building, 121 East Gurley Street, Prescott, Arizona; restoration of the Elks Opera House and Building; educating the public regarding performing arts, cultural and economic values; contracting with various entities for rental operation of space within the building; and any other non-profit functions which may benefit the building, the theater space and the foundation."

The Foundation continues, in partnership with the City of Prescott which owns the theater space, to plan rehabilitation, renovation and restoration and to enhance the use of the opera house by marketing to all producing and performing entities as well as to meeting and convention planners.

The latest step in the renovation of this grand old theatre is currently underway and continues through November 15, 2007. This phase includes the renovation of the inner (2nd) lobby, concessions upgrades, and the installation of a new, state-of-the-art sound system. In the lobby the existing dropped ceiling has been removed, the artwork will be restored, and the electrical wiring and fixtures are being upgraded. The concessions upgrades will include the addition of a new soda fountain, refrigeration, ice machine, ice well and hand sink. The existing concession stand will be refinished. The City of Prescott is contributing over $135,000 to the sound system and concessions. An Arizona Heritage fund grant and a match by the Arizona Questers will fund the $40,000 lobby renovation. [View Photos]

Elks Theater History from the City of Prescott