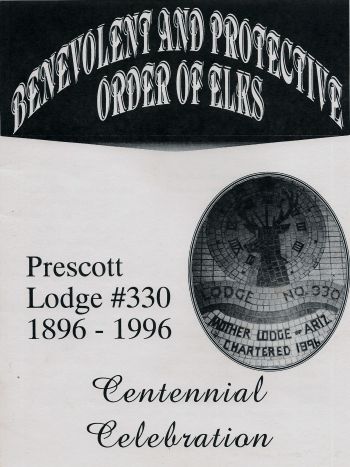 A MESSAGE FROM THE EXALTED RULER

The Benevolent and Protective Order of Elks is 128 years old, having been founded in New
York City in 1868. This American fraternity dedicated to Charity, Justice, Brotherly Love, and
Fidelity spread rapidly across the United States and it's territories. Only 28 years later, fully 16
years before Arizona became a State, the 330th Lodge was chartered in the wild territory in a
small community named Prescott.

In 1996, Prescott Lodge #330 of the Benevolent and Protective Order of Elks, of the United
States of America, "The Mother Lodge of Arizona", will celebrate 100 years of service to the
Community, the State and to the Country.

Our beloved Country and State and City of Prescott have changed vastly during these past
100 years while the Order of Elks has changed very little. The American Flag still stands at the
side of the altar and the Bible still rests on the altar during all meetings. The Pledge of Allegiance
to the Flag and an opening prayer are still given prior to conducting the business of the meeting,
and a closing prayer is still given prior to declaring the session closed.

Prescott Elks Lodge #330 is extremely proud of our centennial milestone and ask that
Prescott and the surrounding communities and indeed the entire State join us in celebrating 100
years of ELKDOM in Arizona. 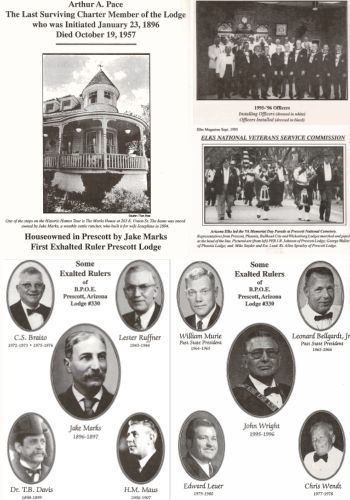 Here are selections from the Prescott Lodge #330 Centennial Celebration Program.

Poetry about The Mother Lodge of Arizona - Prescott 330

Highlights of the 50th Celebration.pdf

Photos from the Centinnial Program.pdf

History of the Elks Ladies of Prescott Lodge.pdf