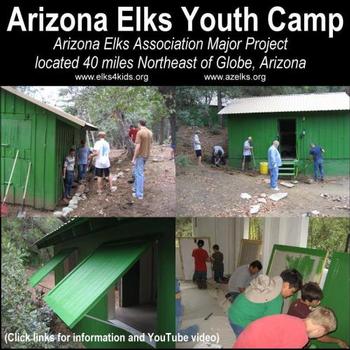 The camp is located on 7.83 acres adjacent to Workman Creek. The camp consists of a large main hall with a craft/first aide room and kitchen with facilities. There is separate male/female restrooms and shower facilities. There are 8 cabins at the camp that will sleep 6 to 8 people in each cabin. The camp has a generator room that supplies electricity for the camp. The camp has a potable water well that supplies water to the kitchen and restrooms/shower rooms. The elevation of the camp is 5600'.

The members of the Arizona Elks Association and its member Lodges have spent a vast amount of time, energy and money to refurbish the camp to benefit the youth of Arizona. The maintenance of the camp is never ending so we are requiring the people using the camp to assist in keeping it in good condition.

Each group must bear in mind that the camp is adjacent to Workman Creek which is subject to flash flooding during the rainy season and the area is also subject to lightning during rain storms.

1934 – The Miami YMCA Board of Directors started a camp for the local Globe/Miami youths in the Sierra Ancha Mountain Range South of Young Arizona on Reynolds Creek. The camp was in operation for the next 6 years.

1940 – The Miami YMCA Board purchased 7.83 acres of land on Workman Creek and the camp was moved to that location.

1940-1980 – Because of the booming economy in the copper industry the camp operated over the next 40 years and thousands of local youths had the opportunity to avail themselves of the camp. All the work done at the camp was from local volunteers and youth groups with support from the copper mines and other businesses.

1980 – The economy in the Globe/Miami area took a downward trend. The YMCA building in Miami was closed and the land on Workman Creek was sold to a Uranium mining firm that had claims in the area.

1984 – The Uranium adventure didn't pan out and the land came back to the YMCA Board.

1984-2001 - Because there was no interest in opening a Y camp again and the economy was still bad, the camp was rented out to church groups, youth service groups and families as a camp ground facility. The money derived from the rental went to pay the taxes.

2001 (August) – It came to the attention of the Arizona Elks Major Projects that the camp might be for sale. Jack Warter Jr., PSP and Ed Warner, PDDGER, met with Wayne Blake, Chairman of the old YMCA Board, and he said he had been taking care of the camp with no assistance for the past 20 years and he was ready to get out from under it. Wayne said he had lots of offers to buy it but felt it would best serve the community if someone bought it and turned it back into a youth camp.

2001 (October) – The Arizona Elks Major Project Board was informed of the possible sale of the defunct Y camp. The AEMP had been looking for a second major project and the camp was one Elks and their family's state wide could get involved in because it was going to a project requiring a lot of refurbishing.

2001 (November) – A majority of the AEMP Board members and some AEA Officers journeyed to the camp to get a first hand look at the facility and liked what they saw.

2001 (December) – The AEMP Board met with the Arizona Elks Association Governing Body and requested permission to enter into negotiations with the YMCA Board for sale of the land. Joe Riley had looked at the legal documents and saw no problem on that end. Permission was granted.

2002 (March) Dan Hagan Appraisal Company appraised the 7.83 acres of land at $340,000.
A price of $300,000 was negotiated with the YMCA Board. The YMCA Board requested the payments be $15,000 per year for 20 years and the monies would be used for local high school and trade school scholarships. Please note there was no interest factored into the negotiated price.
A letter of intent was drawn up by Joe Riley and presented to the YMCA Board pending the vote in May 2002 of the Association member Lodges.

2002 (May) – A vote was taken at the annual convention and the purchase of the camp was approved by an overwhelming majority of the member Lodges.

2002 (July) An agreement was drawn up and presented to the YMCA Board and AEMP for signatures.
All paperwork was turned over to a title and trust company to complete the sale.

2003 (March) – After much red tape on the part of the trust company the sale of camp was finalized.
Located at the camp at the time of the sale was a main building that included a kitchen with outdated equipment, 8 usable cabins, an Onan 4 cylinder LP gas generator, 2 propane tanks, a fairly modern restroom/shower room building, a system that used creek water to supply the camp, a 30' deep surface well, an old cistern, several old outhouses, an old shower room, an old barn, several other old buildings and a lot of trash and unusable material.

The property was overgrown with brush, saplings and blackberry vines. There was also a lot of down and dead wood all of which creates a fire hazard.

The camp was purchased with the intent it would be used for State wide Church Groups, Boy/girl scouts, 4-H, youth corps and other supervised youth service organizations. Free weeks and weekends could be used for family reunions or Lodge outings and picnics.

A committee was formed that included all interested Elks from the 4 Arizona Elks Association Districts. A game plan was laid out to refurbish the camp and bring it back to working order to accommodate the Arizona youth groups. Our goal to have this accomplished by spring of 2005 was successful!