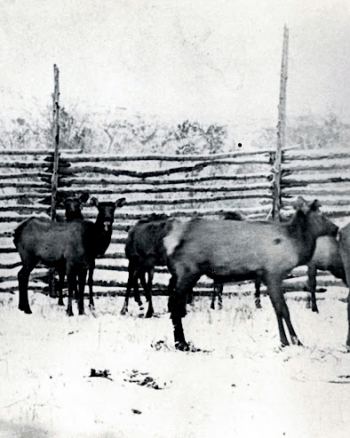 In 1914 the Elks of Arizona transported a herd of Elk
from Yellowstone National Park in Wyoming and Montana to the
Sitgreaves National Forest,between Clear Creek and
Chevalon Creek in Coconino and Navajo Counties,Arizona.
ARIZONA ELKS BRING HERD OF ELK TO ARIZONA

This article appeared in Thursdays, April 16, 1914 Arizona Gazette just prior to the Arizona Elks Reunion in Phoenix. It was written by Mulford Winsor, Past Exalted Ruler and Past District Deputy from Yuma Lodge No. 476.

I take pleasure, on behalf of the commettee composed of Governor George W.P. Hunt of Globe Lodge No. 489, Bro R.N. Loony of Prescott Lodge No. 330, and myself, in submitting the following description of the successful culmination of the enterprise inaugurated by the Elks of Arizona, in transporting and placing a heard of Elk from Yellowstone National Park in Wyoming and Montana to the Sitgreaves National Forest, between Clear Creek and Chevalon Creek in Coconino and Navajo Counties,Arizona.

Armed with a permit granted by the Secretary of the Interior the committee secured the capture, in January 1913, of and cows; also three year old and two, two year olds. eighty-two fine yearlings, properly proportioned between bulls. The younger animals were selected, in preference to the old ones, because the capture, transportation and transplanting of yearlings has invariably proven more successful than in the case of more mature animals. While propagation does not begin so quickly, it has been definitely determined that, in the long run, much more satisfactory results are obtainable.

These Elks were kept in captivity at Gardiner Montana, during the cold month of January, 1913 and fed on hay while being familiarized with surroundings. They thus became comparaitively gentle, which greatly faciliated their safe transportation.

Filling two cars, they left Gardiner, January 31, 1913, under the personal care of a competent keeper, arriving in Winslow, Arizona, the nearest railroad point to their destination, in excellant condition,excepting to three of the yearlings. Two of these were killed in route and another so badly injured that it died in the stock yards at Winslow. It is porbable that the yearlings so lost were injured by the older cows above mentioned, as it happens, the latter have already compensated for the loss attributed to them by bringing forth three calves.

After resting a few days in the stockyards at Winslow the remaining eighty-two Elk were loaded into crates, each containing eight or nine animals, and carried by freight wagons to a location in the National Forest about forty miles south of Winslow Owing to the heavy snows and extremely bad condition of the roads, this journey, short as it was, constitution by far the worst part of the entire trip between the original home of the Elk in Wyoming and Montana and their destination. During this short trip three additional Elk were killed, and it became necessary to remove five others from the wagons, in order to prevent their meeting with a similar fate. Of the five removed from the crates, two followed the wagons and of their own volition entered the corrals prepared for the reception of the heard.

In connection with Elk so released an intersting an unusual story may be told. The three Elk when freed from the crates which held them in captivity, wandered off down one of the canyons which traverse the country, grazing as they went. One evidently became thirsty and coming upon a cabin, occupied by a frontiersman porceeded to make useof its newly-aquired knowledge of the customs of civilization. There the young Elk stamped upon the door and doorsteps with its hoofs until the occupant appeared. The surprise of the individual upon beholding his visitor can well be imagined. Soon determining the wants of the animal, which continued to hang about, the occupant of the cabirt produced a pan of water. The Elk, doubtless with gratitude in its heart, satisfied its thirst and proceeded on its way down the canyon.

Accordingly, seventy-six Elk were placed in the corral prepared for them, while three, however, hung closely about until the entire heard was released, when they joined their fellows.

The Sitgreaves National Forest, where the Elk now range, is a magnificent belt of pine timber, about forty miles in diameter each way,admirably suited for their protection and propogation. It is bounded on the east and west by almost impassable canyons, beyond which the animals are not likely to soon wander, and the south by the rim of the Tonto Basin Country. Itis well watered, covered with as abundant supply of grass, and the winters are not regorous. The principal danger to the animals lies in,depredations by human poachers and mountain lions, the latter being fairly numerous in the forest. The consequences of the activities of the lions must be accepted as a matter of course, but every effort is being made to protect the Elk from the Aggressions of conscionusless hunters. The state game warden, backed by authority of the law which aims to afford complete protection to the Elk, is taking an active intrest in the enterprise. Brother C.M.Bledsoe, of Winslow Lodge No. 586, who has played a prominent part in carrying out the undertaking since the arrival of the arrival of the herd in Winslow, has been appointed a deputy game warden and his special care is Arizona's herd of Elk. Other appointments have been made, of interested parties, mostly members of the Order, living in the forest, who, with the assistance of the forest rangers, the latter under full instructions of the department with which they are connected, will afford all the protection in their power. Since transgressions by poachers will be vigorously prosecuted by State Game Warden Frank W. Rogers, and his assistants, it is believed that poaching will be effectually prevented. It is hoped, that should information regarding poaching cometo the attention of a member of the Order, State Game Warden Rogers be promptly notified .

The original herd of seventy-nine has split into severalparties, but none have wandered far from the point where theywere originally placed. Several of these small herds have beenseen recently, when it was learned that they were accompanied bya number of healthy looking calves. There is no question that the increase in numbers will be rapid and that before many years, Arizona will posses a well stocked preseve of which it may well be proud.

From every viewpoint the enterprise appears to be an unqualified success. The Elk have been transported from a long distance, placed in their new home under favorable conditions and are strong and healthy. The Members of the Benevolent and Protective Order of Elks throughout Arizona have every reason to congratulate themselves upon this practical solution of the problem of preserving the noble animal from which their Order derivies its name. Our success has blazed the path for the Elks of other states and already similar enterprises are under way elsewhere.

The entire expense of the undertaking was $2,125.07, covered by contributions received from eleven Arizona Lodges, the State Reunion Association, Governor George W.P.Hunt and Dr. R.N.Looney. The per captia cost on seventy-nine Elk placed in the forest alive and well, was $26.90, Which, considering the many difficulties attending their capture and the long distance they were transported, is thought to be very reasonable. This record has proven truly remarkable and constitutes a matter which can well be viewed with pride by every member of the Order of Elks in Arizona .
"How First Elk Herd Was Brought To Arizona" page from Winslow Lodge #536