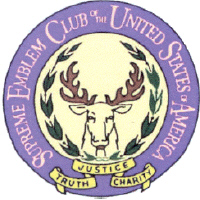 WHY BECOME A MEMBER OF CULVER CITY EMBLEM CLUB #254? • PRIDE IN BELONGING • MOTIVATING • JOY OF ACCOMPLISHMENT • COMMITMENT TO THE VALUES OF CARING • OPPORTUNITY TO MAKE A PROFOUND DIFFERENCE OUR MEMBERS SAY...EMBLEM CLUB enbraces participation ...offers change...enhances self-esteem...while building on tradition of our founders "75 years ago"...that bettering the lives of others is truly the greatest of all achievements...as well as establishing higher ideals of every day living. WE BELIEVE IN AMERICA...HONOR THE AMERICAN FLAG...PROMOTE AND PERPETUATE GOOD FELLOWSHIP To consider membership in Emblem Club, it is an opportunity to serve...focus on continuing growth...to offer our talents by being an asset to society and improve the quality of life in the communities in which we reside through community service...with emphasis on the less fortunate, aged, hadicapped, veterans, youth, drug awareness and literacy projects. We have over 300 Emblem Clubs across our great country including Alaska and Hawaii. We offer this opportunity for membership to individuals who are American Citizens, over 16 years of age. If you wish to learn more about our national organization, please visit the website at Supreme Emblem Club

A small group of Elks' ladies began meeting together in 1917 to wrap bandages for World War I. They enjoyed the socialability and at the same time felt the joy of accomplishment. The combination of assisting others and enjoying good fellowship appealed to other women and a community group was formed. The first Emblem Club was organized in Providence, Rhode Island. Nine Emblem Clubs were organized during the first year in the New England states; those states included Rhode Island, Masachusetts, New Hampshire and Connecticut. This number has steadily increased and now in more than seventy years of formal existence, Emblem Clubs are located in every section of this country including California, Nevada, Hawaii and Alaska. The Emblem Club attracts individuals of many diverse talents, abilities and ages, all of whom combine to make Emblem a very special organization. In Emblem, there is an important place for each member.

An individual must be a citizen of the United States of America and must be at least 16 years old. A prospective member must be sponsored by an Emblem Club member and an Elk, both must be in good standing. The Emblem Clubs are independent organizations. The good will and assistance of the members of the Elks Lodge is most welcome and helpful. Cooperation between the Elks and the Emblem Club is desirable in the interest of progress and harmony. An emblem member attending a meeting or social event within the Elks Lodge, must be governed by and abide by the house rules of the Elks Lodge.