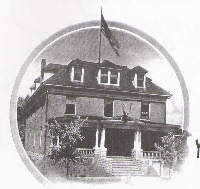 1910-
Membership was 600. J.P. McBaine was E.R., and the Lodge moved to a 2 1/2 story brick building at 121 S. 10th. Members decided on new quarters and bought the Winn Hotel, 121 S. 10th Streen, from Mr. and Mrs. A.J. Einn. Several rooms were added at the rear of the first floor, and the upstairs rooms were rented to members as living quarters. (In 1932, during the Great Depression, the Lodge was forced to sell the Winn Hotel to pay off a mortgage. The members made $12,000 from the sale, enough to pay off all their debts and still have a small profit.

1918-
"In all its history, Columbia has never faced such a calamity as it faces today in coal famine that now prevails. The thermometer registered 19 below here last night and the heavy drifting snow has stopped the Wabash. Many families are entirely out of coal and are burning wood and rubbish to keep the fire going. The Elks Lodge will be open tonight to anyone who has no coal, and people who wish to sleep there may bring blankets. All schools, lodges, churches, pool and billiard parlors are ordered closed" -Columbia Daily Tribune, January 12, 1918

"The Lodge welcomed home members who returned from military camps. At the regular meeting last night, Foster Thurston, Secretary, pointed out that the Columbia Lodge had 80 of it's members on the muster rolls of the United States Army. Many of those ar in Europe." -Columbia daily Tribune, Dec. 14, 1918