The Benevolent and Protective Order of the Elks is proud to announce that Stewart Israel of Plymouth-Ann Arbor, Mich., Elks Lodge No. 325 has been selected as the VA NAC Male Volunteer of the Year!

Stew has been volunteering to serve veterans in his community for more than 45 years, while working as a high school teacher and raising a family. In that time, he has excelled in roles both local and national. Today, he is the National Veterans Programs Chair for the Elks, a longtime NAC Deputy Representative, the Elks Representative at the Detroit VAMC, and a fill-in Representative at the Ann Arbor VAMC.

In addition to his official responsibilities, Stew pulls off several large events for local veterans annually. Every April and November, he plans a steak dinner for 140 veterans from local VA facilities and shelters. Veterans look forward to the event all year, which includes a live band and a party following the dinner.

He also coordinates a Christmas gift program every year, soliciting gifts and donations to fill 850 gift bags. Ninety community members help distribute these to veterans at multiple VA facilities and shelters. Planning for this event is year-round; in August when no one else is thinking of Christmas, Stew is calling local dentists to ensure they can donate toothbrushes and toothpaste for Christmas gift bags.

A few years ago, we filmed a video about Stew and his fellow Michigan Elks, putting on one of their regular ice cream socials at the Detroit VAMC. Watch the video below to see Israel and the Michigan Elks in action.

Many volunteers found it hard to pivot when Covid restrictions limited usual events, but Stew adjusted quickly. When the Ann Arbor VAMC Elks Representative and Deputy Representative both passed away in 2020, Stew took it upon himself to take over their duties. He quickly raised funds from the community to cover the veterans’ needs. He has since provided more than $8,000 in monetary and in-kind donations to that facility.

Through it all he remains humble, stating that he’s only serving God and country. “Stew is not a veteran but has taken it up upon himself to put the care for these veterans and the quality of that care at the forefront of his volunteer experience,” says Bill Browning, Chief of Volunteer and Community Relations at the John Dingell VAMC.

It’s that level of dedication that makes Stewart Israel such an appropriate choice for NAC Volunteer of the Year. But don't just take it from us! Read a few excerpts below from his fellow Elks and volunteers. 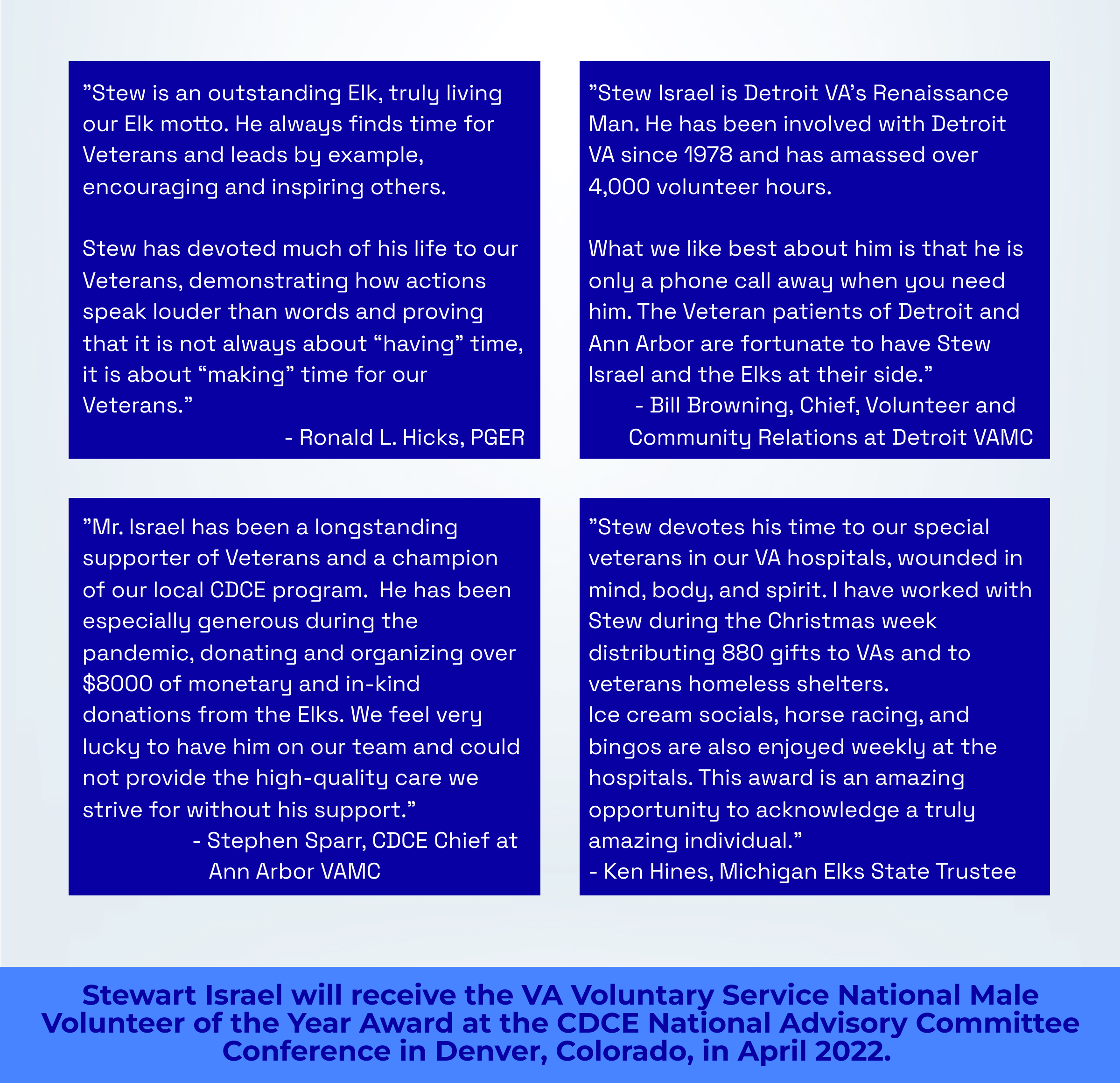