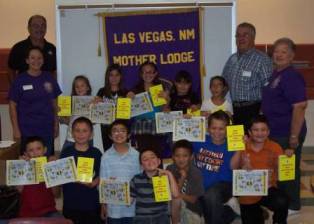 The Dictionary Project was founded in 1995 by Mrs. Mary French of Charleston, S.C. The sole mission of this non-profit organization - which we, as Elks, share - is to distribute dictionaries to as many third-graders as possible in the 50 United States in our environs. In 1999, 10,295 dictionaries were distributed. Varying Service Clubs were the main thrust of sponsorship.