Check Our Our New CP Program !!

The Cerebral Palsy Commission, in conjunction with the State President, has implemented a new program emphasizing "grass roots" participation from the state's Local Lodges. 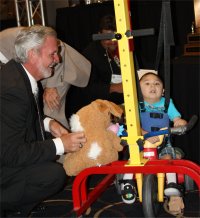 Funds will be made available for equipment and modifications to equipment and facilities for those with Cerebral Palsy. This could be the purchase of a wheelchair or walker, modifications to equipment (such as wheelchair lights), or modifications to facilities (special needs bath remodels, etc.). The Commission feels we can better utilize the funds raised by offering this kind of assistance, instead of running our own "In-House" program, which has become very expensive and has produced limited tangible results. The Commission is still looking into the future of the "walkables", but these devices will no longer be the main component of the program.

Checks will only be made out to equipment vendors and suppliers, contractors or local Lodges. This will give us a check that the money is actual spent for the intended purpose.

Disbursement of funds will be from a statewide pool, with no quota per district. That way we can help the area with the greatest need. The Commission will, as much as possible, be equitable in the distribution of funds.
These applications should be downloaded by or given to any individual or family in need. Once filled out, that application is then mailed or dropped off at the local Elks Lodge. The application is then approved locally by the Exalted Ruler, Secretary or Local C.P. Chairman, and forwarded to the State C.P. Chairman. From there the application will be distributed to the full C.P. Commission for consideration and approval. Once a majority has approved the request, a voucher will be sent to the State Treasurer, and a check will be cut. The amount of money available each year will be based on the budget approved at the Spring Convention, and may vary year-to-year based on the success of our fundraising efforts. This year, we should have at least $60,000.
In addition, after several requests, the C.P. Commission will also make available grants directly to local Lodges, much like Elks National Foundation. These grants would be available after a Lodge meets their per capita donation. Grants would be limited to $500, and could be used for special meals, a Christmas Party, special donation or other activities for those with C.P., other handicaps, or other debilitating diseases. If the request is approved, then after the event you will need to send documentation (receipts, cancelled checks, etc.) and reimbursement from the State C.P. Program will be made.

The following people were winners at the CP drawing on 9/24/11.

What is Cerebral Palsy?
www.cerebralpalsyinfo.org

Cerebral palsy may cause a number of symptoms, including seizures, spasms, visual and hearing problems, hyperactivity, and learning disorders. There is not a cure, however several therapies are available for the treatment of cerebral palsy. Although living with cerebral palsy can be difficult, it is certainly possible to be successful while coping with the disorder.