LODGE #408 EDUCATES YOUTH ABOUT THE FLAG 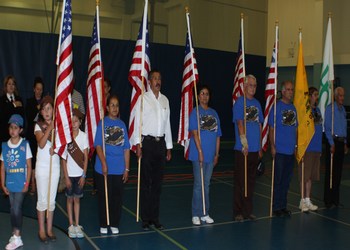 
Patriotism has characterized the Benevolent and Protective Order of Elks of the United States of America since the early days of the organization. Allegiance to the flag of our country is a requirement of every member.

In 1907, the BPO Elks Grand Lodge designated by resolution June 14 as Flag Day. The Grand Lodge of the Order adopted mandatory observance of the occasion by every Lodge in 1911, and that requirement continues.

History of the Star Spangled Banner

History of the Pledge of Allegiance

I Am the Flag of the United States Of America

I am the flag of the United States of America.
My name is Old Glory.
I fly atop the world's tallest buildings.
I stand watch in America's halls of justice.
I fly majestically over institutions of learning.
I stand guard with power in the world.
Look up and see me.

I stand for peace, honor, truth and justice.
I stand for freedom.
I am confident.
I am arrogant.
I am proud.
When I am flown with my fellow banners,
My head is a little higher,
My colors a little truer.
I bow to no one!
I am recognized all over the world.
I am worshipped - I am saluted.
I am loved - I am revered.
I am respected - and I am feared.


I have fought in every battle of every war for more then 200 years. I was flown at Valley Forge, Gettysburg, Shiloh and Appomattox.
I was there at San Juan Hill, the trenches of France,
in the Argonne Forest, Anzio, Rome and the beaches of Normandy.
Guam, Okinawa, Korea and KheSan, Saigon, Vietnam know me.
I'm presently in the mountains of Afganistan and the hot and dusty deserts of Iraq and wherever freedom is needed.
I led my troops, I was dirty, battleworn and tired,
But my soldiers cheered me and I was proud.
I have been burned, torn and trampled on the streets of countries I have helped set free.
It does not hurt for I am invincible.
I have been soiled upon, burned, torn and trampled in the streets of my country.
And when it's done by those Whom I've served in battle - it hurts.
But I shall overcome - for I am strong.
I have slipped the bonds of Earth and stood watch over the uncharted frontiers of space from my vantage point on the moon.
I have borne silent witness to all of America's finest hours.
But my finest hours are yet to come.
When I am torn into strips and used as bandages for my wounded comrades on the battlefield,
When I am flown at half-mast to honor my soldier,
Or when I lie in the trembling arms of a grieving parent
at the grave of their fallen son or daughter,