Home of the 19th United States Vice President, William Almon Wheeler.  Born in Malone, a former student at Franklin Academy and then the University of Vermont. After two years there he then returned home to study law and was admitted to the bar as an attorney. Town Clerk at the age of 21, Superintendent of Schools and then in 1846 Franklin County District Attorney.  In 1849 he was elected to the NYS Assembly where he served two terms, refusing a third then to the NYS Senate in 1857 as a Republican.  He was then elected to US Congress in 1860 where he gave support to President Lincoln.  In 1867 delegated to the NYS Constitutional Convention for which he was President.  Then in 1876 Rutherford B. Hayes was nominated for Presidency, with Wheeler chosen as his running mate.  He served beside Hayes as Vice President of the United States from 1877-1881, then retiring from public life.  He returned home to Malone and did many charitable works.  He passed away at his home in 1887 and was buried to rest in Malone at Morningside Cemetery. 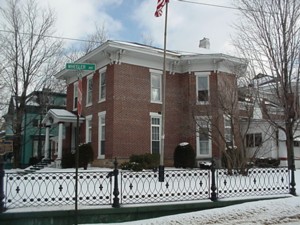