Lodge #78 has a rich history in Atlanta! 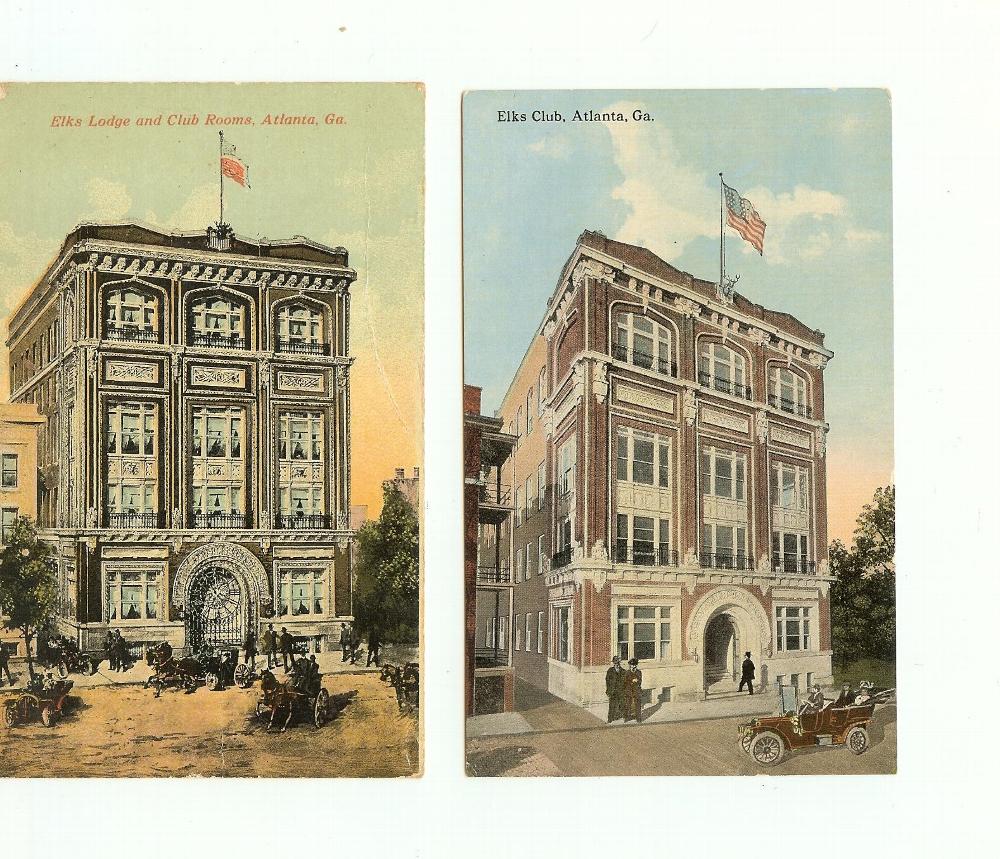 Over the course of the past eleven or so years, it has been my pleasure to take glimpses of our Bpoe 78 Lodge.  For our new folks, allow me to briefly (Reader's Digest style) give a capsule version from the birth of our first Atlanta Lodge.

As you probably know, Atlanta began as a railroad terminus, hence the first name of city: Terminus (Greek for Ending).  Years later, Georgia Governor Lumpkin was asked if he would consider a change in name from Terminus to Lumpkinville in his honor.  The Governor declined, feeling that Lumpkinville, while a grand name would be a bit rural for what he considered an up and coming, albeit small, city.  In declining this honor, he suggested that his young Daughter, Martha, would be a nice name.  Thus began the transformation of Terminus into Marthasville.

Outgrowing Marthasville, next came the birth of Atlanta.  The origin of the name Atlanta remains one of her mysteries.  Perhaps the name is the feminine of Atlantis, or the masculine Atlantic, no one knows for sure.    The name, Atlanta, was conceived in 1845, the fictional birthday of Scarlett O’Hara of Margaret Mitchell's Gone with the Wind fame.

Our #78 had its beginnings in 1888 with a disposition granted by the Grand Exalted Ruler    to organize an Atlanta lodge.  However, he rights were not exercised until 1892.  The # "78" signifies the 78th chartered lodge in the United States (The first lodge, formed in New York City, appropriately signifies the Lodge # "1" designation).

From the beginning, the new lodge met in various homes along Peachtree Street in downtown Atlanta.   The primary meeting place (1911) was in a Victorian mansion on Peachtree Street, one mile from Five Points.

In February, 1912 the cornerstone was laid for the lodge on Ellis Street, bought and paid for exclusively by and for Elks.  Incidentally, the three story brick lodge is still in existence after all of these years.  Several pictures of the Ellis Street lodge are on the walls leading into the bar area of our current home.  Later lodge homes, in order, were located in the 100 block of Lucky Street, the fifth street area of midtown, Buckhead (The Buckhead Lodge) Northeast Atlanta, and Montreal Road in Tucker.

General John Pershing (an Elk) as well as leader of the American Forces in World War One, was granted honorary membership in our lodge #78, during a dinner and ceremony at our Elks Lodge on Ellis Street in downtown Atlanta.  A picture of General Pershing attending the dinner  hangs in the hallway wall as you enter the lodge.

According to Grand Exalted Ruler Bruce Campbell, (circa 1919),”…the armistice was signed on the 11th day of the 11th month and at the 11th hour.  The minutes explain that General Pershing had a great deal to say about when the Armistice was to be signed and everyone knows about the importance of the 11th day, month and hour to all Elks”.

July 1, 1920 saw the initiation of some 40 applicants just days prior to the …”on to Chicago trip for the National Elks Convention” transpired.  The business meetings began at

7:00 pm with the candidates initiated at 8:00 pm.  Earlier, in the June 25, 1920 “Spirit of 78” newsletter,  Exalted Ruler, John McClelland says,…”Be there, “Bill”, without fail.  We need you…and come prepared to say you are going to Chicago with us.  The usual refreshments-and plenty of fun-and business matters were transacted”.

GOOD FOR THE ELKS

“If the Atlanta lodge of Elks had not realized a dollar from its splendid minstrel performance on last Wednesday at the auditorium (Courtland Street) , its members could feel fully repaid for their efforts in the pleasure and the happiness it brought  to a thousand little orphaned children in and about Atlanta.  The children, from some 20 institutions for children, were the special guests of the B.P.O.E.

To the patrons at the matinee, it was heartwarming to see the Elk’s committee leading a parade of happy children down the aisle, some Elks, bearing in their arms, children who are crippled so badly as to prevent them from walking. In addition, the ELKS has as their guests more than 200 people from the base hospital (Fort McPherson ) ; the Confederate Veterans Home (Confederate Ave.);  and the home for the incurables (Boulevard).  It typified a beautiful spirit-this desire of the ELKS to bring happiness to the homeless orphans and to the aged poor of this city -- and it is probable that all of the guests left the auditorium feeling that B.P.O.E. really signifies the best people on earth”.

Here is a list of the organizations invited to the event: