Benevolent and Protective Order of Elks 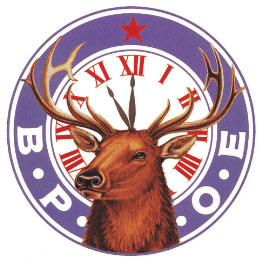 Founded in New York City in 1868 by 15 entertainers. Membership embraced other professions in ensuing years.

This fraternal order was founded "To promote and practice the four cardinal virtues of Charity, Justice, Brotherly Love and Fidelity; to promote the welfare and enhance the happiness of its members; to quicken the spirit of American Patriotism and cultivate good fellowship."

The Order of Elks is a non-political, non-sectarian and strictly American fraternity. Membership in the Order is by invitation of a member in good standing. One must be an American citizen, believe in God, be of good moral character and at least 21 years old. There are nearly a million members today in over 2,100 community Lodges.

The Order, along with our local Lodges, donates approximately $200 million every year in cash, gifts and time to make our communities better places to live. The programs involve assistance to children with disabilities as well as physical and occupational therapy programs for adults. We support Scouting, athletic teams and countless other youth programs.

Through the Elks National Foundation, established in 1928, we grant college scholarships, and administer the Elks National "Hoop Shoot" free throw contest involving 3.5 million children annually as well as a national "Soccer Shoot." The youth of our country have always been important to us.

For this reason the Elks Drug Awareness Education Program was launched to warn primary grade students and their parents of the dangers of drug abuse. Over 4 million pieces of free "drug awareness" literature are distributed each year. One of the newest programs provides teachers and students in grades 4 through 8 with "SPIDER-MAN and the FANTASTIC FOUR" drug awareness comic books and lesson plans entitled "Hard Choices." The material has also been made available on-line via www.elks.org. This has been accomplished in partnership with MARVEL Comics.


Further, the Elks have adopted the Dictionary Program focused on the nations 3rd Graders by providing students in the classrooms with their own personalized students reference; for most their very first book.

We still honor America's heroes as we continue serving our nation's veterans. Every Lodge observes Flag Day on June 14th. This Elks tradition began in 1907 and was later adopted by the Congress of the United States as a national observance.