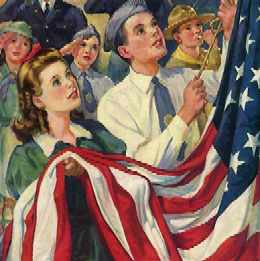 Flag Day Celebration
It is to be expected that an organization dedicated to patriotic service should seek to promote a proper knowledge of, and respect for, the American Flag, and all that it represents. The Benevolent and Protective Order of Elks has done this in many ways. Perhaps the most effective of its prescribed activities is the Flag Day Service. Each Subordinate Lodge is required to conduct this service annually on June l4th, the anniversary of the birth of the American Flag.
The idea of a Flag Day Service was first suggested to our Order by the then Grand Exalted Ruler at the 1907 Grand Lodge Session in Philadelphia. Of the dates submitted for consideration at that time, June 14th was adopted by the session and was called "Elks Flag Day." The following year, in Dallas, the Grand Lodge approved a ritual for the Flag Day ceremony.
The 1911 Grand Lodge Session at Atlantic City made the observance of Flag Day mandatory for Subordinate Lodges by the adoption of Section 229 of the Statutes: "It shall be the duty of each Subordinate Lodge to hold the service known as "Flag Day Services" at the time and in the manner prescribed by the ritual of the Order.
Later on - at the Grand Lodge Session in Atlantic City in 1930 - there was added to this statute an amendment, reading: "The Grand Exalted Ruler may, in exceptional cases and for good cause, grant a dispensation for a different day or to any two or more Lodges to hold such services jointly."
It was not until August 3rd, 1949 that the President of the United States signed Public Law 203, designating June 14th as Flag Day. Thus our Order was not only the first fraternal organization to celebrate Flag Day, but had made this ceremony mandatory long years before the date on which the observance became a nation-wide practice by legal decree.
The ritual for the occasion is an elaborate one and it is quite generally conducted as a public ceremonial. It is designed to be informative as well as inspirational; and the colorful pageantry provided lends itself admirably to the achievement of these objectives. It was President Harry S. Truman who signed the Flag Day bill into law on August 3rd, 1949, who was himself an Elk.