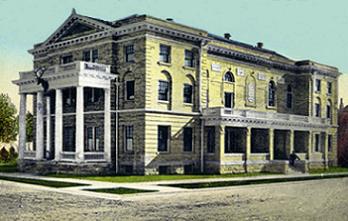 Cañon City Lodge #610 was instituted July 30th, 1900 in Shaffer Hall located on the southwest corner of 4th and Main St.

The Meeting was called to order by Acting District Deputy Grand Exalted Ruler J. Knox Burton. When the business of instituting the Lodge was taken up, 44 members were duly initiated, and enrolled as members of said lodge. The next order of business being nomination of Officers for remainder of the term. The Officers were nominated, elected and duly installed.

It was moved and seconded on December 19, 1900 that the Trustees of the Lodge, act as a committee to confer with several persons, who were about to build business blocks, in regards to a Lodge Room, as they had out grown their present facilities. Several locations were checked and Finally, took a 10 year lease on the upstairs of the F.L.Smith building, to be designed according to Elk Plans. This was authorized by the Lodge on February 6, 1901.

November 27, 1901, The committee appointed to investigate and purchase Elk heads for the Lodge. One was purchased for the sum of $75.00 and two more Elk heads for $200.00. These along with several others adorn the walls of the beautiful Lodge today.

On December 29, 1909 a motion was made that a building committee be appointed. On August 3, 1910 the building committee submitted plans for the new home for approval and they were rejected. It was then moved for the Secretary to write to different Lodges for the plans of their Lodges and price of construction. Motion Carried.

On October 5, 1910, a motion was made that a exclusive new home and club be built at 4th and Macon and the building should be attractive, neat appearing, and distinctive and not be of the stereotype line of the ordinary business buildings. Plans were submitted on February 15, 1911 for approval. By vote of the Lodge, the Board of Trustees were authorized and empowered to enter into contract with Lamb and Campbell for $26,242.35.

The Trustees stated, on December 27, 1911, that the present quarters would be vacated, and that the next meeting, January 3, 1912 would be held in the new home on 4th and Macon. The dedication committee reported, a public reception would be held on Washington's Birthday February 22, 1912.

Bro. Perry A. Clay of Denver #17, delivered the address. Bro. Benj F. Koperlik of Pueblo #90, gave the 11 O'Clock Toast. Whereas District Deputy Grand Exalted Ruler Bacon declared the new home of Cañon City Lodge #610 officially dedicated. At the Noon luncheon, two elk donated by the Cattlemen of Fremont, Park, and Custer counties were served. Various entertainment was furnished in the afternoon by Pueblo #90's Band and Harmony Sextets, and entertainment by Victor Lodge No. 367, an afternoon dance at the Woodmen of the Worlds Hall.

On January 3. 1924 the Lodge approved street paving not to exceed $1,834.40. On October 26, 1938 the contract was let for $2,495.35 to complete the basement for recreational and dining purposes. A complete kitchen was installed in 1943. In the early sixties the Officers and Members decided the facilities were inadequate, and in 1966 an upgrade was started and on June 15, 1967 the Antlers Lounge was completed.

On September 6, 1944 the minutes reveal that the Officers of Cañon City Lodge #610 were the winners in the Colorado Elks Association Ritual Contest. Due to a limited session of the Grand Lodge in 1945, It will never be known if the Officers would have placed in the National Contest. This was the first and only time since that our Lodge took first place in the State Contest.

In 2000 a refurbishment was started that continues today. Also in 2000 the Lodge held it's 100th year celebration that was attended by numerous State and National dignitaries.

The weeds are being cut out and destroyed. The flowers are bearing seed to be scattered among future generations. No one can predict the Future of the Benevolent and Protective Order of Elks.