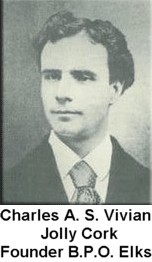 Pictured above is Charles Algernon Sidney Vivian. Vivian is credited with founding the Jolly Corks, and The Benevolent and Protective Order of Elks of The United States of America.

Since 1868, America's foremost fraternal organization has been recognized by the noble creature that is the symbol of the Order. The elk is a peaceful animal, but will rise in defense of its own in the face of a threat. The majestic creature is fleet of foot and keen of perception. A most fitting representation, the stately elk is, for a distinctively American, intensely patriotic, family-oriented organization subscribing to the cardinal principles of charity, justice, brotherly love and fidelity. The Benevolent and Protective Order of Elks of the United States of America has, indeed, fulfilled those principles and established a distinguished record of service and achievement since its founding on February 16, 1868.

But the roots of the association are admittedly shallow, predating the Order's official kickoff by only a few months. A small group of entertainers, wishing to continue their social gatherings on Sundays, when New York's blue laws prevented the opening of public establishments (taverns), began to meet regularly as the "Jolly Corks," a name derived from a bar trick introduced by the group's organizer.

The moving spirit for the Jolly Corks was an Englishman named Charles Algernon Sidney Vivian (1842-1880). This son of a clergyman was a successful comic singer and dancer in the music halls of London. Vivian was a member of the Royal Antediluvian Order of Buffaloes in England ("RAOB"). On November 15, 1867, Vivian arrived in New York City to try his fortune. Vivian is credited with founding the Benevolent and Protective Order of Elks of The United States of America.

Other actors and entertainers soon gravitated toward Vivian's magnetic personality.

While Jolly Corks meetings were held with regularity, apparently no form nor substance resulted, except for the adoption of a toast to members of the group not in attendance. This was the genesis of the eleven o'clock toast. The RAOB in England, the "Eleven O'clock symbol" on the Elks' emblem and, the Elks' Eleven O'clock Toast trace their history to the period prior to the Battle of Hastings in October of 1066. King William of Normandy instituted a curfew when all hearth fires were required to be banked at 11:00, thus ending all meetings. Accordingly, at the hour of 11:00 a toast was offered in remembrance of those who were gone.

Shortly before Christmas in 1867, only a few months after the fellows began to meet, one of their number died, leaving his wife and children destitute. This event gave rise to the notion that, in addition to good fellowship, the Jolly Corks needed a more noble purpose in order to endure, and serving not only their own in need, but others as well, would be appropriate.

Two months later, with a statement of purpose, an impressive set of rituals, a symbol of strength and majesty and such other elaborate trappings that might be expected of a group of actors and musicians, the new fraternal order was launched. The growth and record of benevolence of the Elks is well-chronicled. Since its inception in 1868, the Benevolent and Protective Order of Elks has grown to include nearly 1.2 million men and women in almost 2,200 communities.

Vivian died in Leadville, Colo., Mar. 20, 1880. At the time of his death he was the leader of a repertoire company performing in Leadville.

Why was the elk adopted as the symbol of the Order? The 15 surviving founders of the fraternity desired a readily identifiable creature of stature, indigenous to America. Eight members voted to adopt the elk, seven favored the buffalo. And, as they say, "The rest is ELKS history."

Twenty-nine years after the founding of The Order Fort Madison Lodge Number 374 of The Benevolent and Protective Order of Elks of the United States of America was chartered. Please click the "374's History" button to read a brief history of Fort Madison Lodge 374.

The Benevolent and Protective Order of Elks is committed to the ideals of charity and patriotism. To that end, Elks have now disbursed over the Order's 132 years more than $2.69 billion in cash, goods, and services to the nation's youth, its veterans, the disadvantaged and handicapped, and in support of patriotic and civic programs. In the 1998-99 fiscal year alone, the BPO Elks expended in such fashion over $160 million, and the Order ranks as one of the largest private providers of college scholarships in the nation.

A NOTE ABOUT FLAG DAY:

Patriotism has characterized the Benevolent and Protective Order of Elks of the United States of America since the early days of the organization. Allegiance to the flag of our country is a requirement of every member.

It was through his Elks Lodge in Independence, Missouri, that President Truman got the idea for a national observance of Flag Day.

The number of original "Jolly Corks" may be controversial. Many historical accounts refer to 15 Jolly Corks. However, one of the Jolly Corks died at Christmas time 1867. His death precipitated the founding of the Benevolent and Protective Order of Elks. On February 16, 1868 by a vote of 8 to 7 the Order adopted the Elk as a symbol. Accordingly, it appears there were 16._