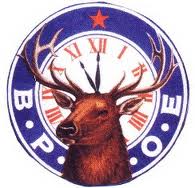 In regard to the Elks' 11 O'clock Toast and its origin, we have to go back long before the BPOE came into existence. One of the main contributions of Charles Richardson -- in stage name of Charles Algernon Sidney Vivian and founder of the American branch of the Jolly Corks -- was to deliver into the hands of newborn Elks the rituals and traditions of a fraternal organization started in England around 1010 A.D., the Royal and Antediluvian Order of Buffaloes, to which he belonged prior to coming to New York.

The RAOB, or Buffaloes as we shall henceforth refer to them, also practiced an 11 o'clock toast in remembrance of the Battle of Hastings in October of 1066. Following his victory, William of Normandy imported a set of rules, both martial and civil in nature, to keep control of a seething Norman-Saxon population always on the edge of a revolution.

Among those rules was a curfew law requiring all watch fires, bonfires (basically all lights controlled by private citizens that could serve as signals) to be extinguished at 11 each night. From strategically placed watchtowers that also served as early fire-alarm posts, the call would go out to douse or shutter all lights and bank all fires. This also served to discourage secret and treasonous meetings, as chimney sparks stood out against the black sky. A person away from his home and out on the darkened streets, when all doors were barred for the night, risked great peril from either evildoers or patrolling militia.

The hour of 11 quickly acquired a somber meaning, and in the centuries that followed, became the synonym throughout Europe for someone on his deathbed or about to go into battle: i.e."His family gathered about his bed at the 11th hour," or "The troops in the trenches hastily wrote notes to their families as the 11th hour approached when they must charge over the top."

Thus, when the 15 Jolly Corks (of whom seven were not native-born Americans) voted on February 16, 1868, to start a more formal and official organization, they were already aware of an almost universally prevalent sentiment about the mystic and haunting aura connected with the nightly hour of 11, and it took no great eloquence by Vivian to establish a ritual toast similar to that of the Buffaloes at the next-to-last hour each day.

The great variety of 11 O' clock Toasts, including the Jolly Corks Toast, makes it clear that there was no fixed and official version until 1906-10. Given our theatrical origins, it was almost mandatory that the pre-1900 Elks would be expected to compose a beautiful toast extemporaneously at will. Regardless of the form, however, the custom is as old as the Elks.

Famous Elks
Although the original Elks were actors and entertainers, members of other professions soon joined the organization. Today's Elks represent just about the full spectrum of occupations in America. Throughout the course of the Order's history, many celebrities from the entertainment field, business and public service have been Brother Elks.

Presidents Warren G. Harding, Franklin D. Roosevelt, Harry S. Truman and John F. Kennedy were all Elks. Former President Gerald Ford belonged to Grand Rapids Lodge No. 48, where his father served two terms as Exalted Ruler. Of course, many members of Congress have been Elks, too. Former Speakers of the House Tip O'Neill, Carl Albert, John McCormick and Sam Rayburn all belonged to the fraternity. Former Speaker Tom Foley belongs to Spokane, Washington, Lodge. And the late Hale Boggs of Louisiana was also an Elk.

Entertainers Lawrence Welk, Will Rogers, Jack Benny and Andy Devine were Brother Elks, too. Brother Devine served as Exalted Ruler of San Fernando Lodge No. 1539. And Brother Clint Eastwood is a member of Monterey Lodge No. 1285. William F. Cody, better known as "Buffalo Bill," was also a Brother Elk. From the sports world, the Order has counted among its members the likes of Vince Lombardi, Casey Stengel, Mickey Mantle, Whitey Ford and Jim Finks.