The COVID-19 pandemic was just a whisper when the 2020 Hoop Shoot season tipped off in the fall of 2019, with children from 8 to 13 years old toeing the line in gyms all over the country. Just like any other year, the tournament rolled through the district and state levels, culling a field of more than 235,000 competitors to just 288.

Then, on the eve of regional competition, the wheels came off.

“We were so close to the finish line,” said Elks National Foundation Director Jim O’Kelley. “It was the weekend of March 13, and we had seven of our 12 regional contests scheduled for the 14th.”

Earlier that week, the NBA suspended its season, and the NCAA canceled the men’s basketball tournament. The Hoop Shoot began losing its regional venues as schools closed their doors to outsiders.

The Hoop Shoot completed four of seven regional contests that weekend; the other three were canceled. On Monday, March 13, the program canceled the five regional contests scheduled for March 20 along with the National Finals.

A year later, in March 2021, the 2020 Hoop Shoot season bounced back. The eight suspended regional contests resumed, with the semi-finalists shooting in small pods or individually, their 25 regulation shots and additional 25 tie-breaking shots witnessed by Elks volunteers serving as scorekeepers, line judges and rebounders.

“It was a challenge, but it was fun to see it happen across the country,” said Youth Programs Associate Makenna Cannon, who oversees the Hoop Shoot program.

With a full slate of 72 National Finalists finally in hand, the National Finals commenced in April. Some had waited a full year to meet their opponents. Most had freshly printed tickets. All stepped up to the line in pods or remote sites to take their shots at a championship.

As the results came in, Cannon secured them in a locked box until they could be shared in the Reveal Show on the ENF’s YouTube channel. 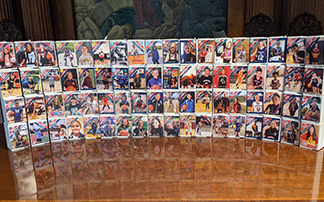 On Friday, May 14, 2021, the Hoop Shoot closed the book on the longest season in the program’s history with the virtual Reveal show, which re-created the drama of an in-person competition. “It brought back some of that pit-of-the-stomach suspense,” remarked Hoop Shoot fan Mike Clark of Grapevine, Texas, Lodge No. 2483.

This past year, Hoop Shooters got an unprecedented chance to use discipline and focus to bounce back.

The 2020 Finalists stayed motivated and determined because of what the contest means to them.

“The Hoop Shoot has been a big part of my life because I practice every day with my grandpa,” said Brett Saunders, a boys 8-9 finalist.

Ellison Graham found motivation in the unknown. She didn’t know if the finals would happen, so she just kept practicing.

For Lilly Henriksen, free throws kept her motivated off the court, too.

“This past year has been really tough on everyone because of COVID,” Lilly said. “To feel better, I did the only thing I could control and practiced basketball in my driveway. This has been a lot of fun and gave me something to do.”

The contestants aren’t the only ones who kept going—the volunteers did, too. “The Elks is a volunteer organization, and this program would not happen without the huge support from our volunteers, this year in particular,” said Cannon.

The Hoop Shoot volunteers—from the Lodge to the Regional levels—signed on in the fall of 2019 for the 2020 season. Two years later, they were still going.

“They all went above and beyond to help carry us to this conclusion,” O’Kelley said. “Thanks to their hard work, we were able to have the reveal program to give everybody some sense of normalcy and try to re-create the drama for the Hoop Shoot finals.”

And the winners are… 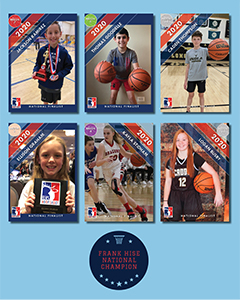 Six champions were crowned at the 2020 Finals Reveal. All six will have their names and images displayed in a brand-new exhibit in the Naismith Memorial Basketball Hall of Fame in Springfield, Massachusetts. They’ll have the chance to visit the Hall as guests of the Elks when it’s safe to do so.

“It’s been a long, hard journey, but we’re so glad we’re here, and we’re so glad to have six incredible national champions,” said Cannon.

Jackson Ramirez, sponsored by Walnut Creek, Calif., Lodge No. 1811, shot a perfect 25, then went on for another perfect 25 in a shoot-off to take home the title in the 8-9 boys division.

Ellison Graham, sponsored by Great Falls, Mont., Lodge No. 214, returned to the National Finals for a second time. But this year, she shot a perfect 25/25 to secure the championship of the girls 8-9 division. It was the first perfect score in the division since 2013.

Kayla Stidham, sponsored by Greenfield, Ind., Lodge No. 1720, is the daughter or 1993 National Champion Lisa Shepherd and the niece of 1985 National Champion Stacie Shepherd. She followed in their footsteps, sinking 24 shots to clinch the title in the girls 10-11 division. Oklahoma was the state to beat in the 12–13-year-old divisions. Logan Busby, sponsored by Durant, Okla., Lodge No. 1963, was crowned champion of the girls division.

Meanwhile, Caden Thompson, sponsored by Claremore, Okla., Lodge No. 1230 saw a tiebreaker unlike any other. Four boys in the 12-13 division got perfect scores; three would take home titles, while one contestant would leave in fourth place with a perfect score—something that has never happened before. In one of the most dramatic shoot-offs yet, Caden sank 20 of 20 tie-breaking shots to take home the gold trophy. 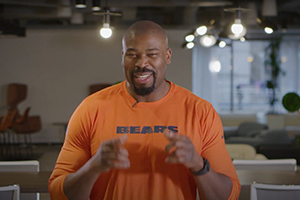 On Saturday, May 15, the Elks celebrated the National Finalists in a virtual awards banquet. Former NFL player Israel Idonije addressed the Finalists. He shared his own journey and the obstacles he overcame, while reflecting on the dedication of the Finalists.

At the Awards Banquet, the ENF recognized the Frank Hise National Champions, plus the winners of the three Hoop Shoot awards: the Emile Brady Award, the Getty Powell Award, and the Cam and Linda Cronk Award.

The Getty Powell Award is given to the top overall boy and girl scorer. National Champions Ellison Graham and Caden Thompson are the 2020 Getty Powell winners.

The Cam and Linda Cronk Award recognizes the region that scores the most free-throws. This year, with a combined 139 shots made from 150 attempts, Southeast Central Region 9 took the title.

“It was a year like no other because of what’s been happening beyond our control, but also because of what we saw on the court,” said O’Kelley. “Ten perfect scores—that’s twice as many as our previous record. We’ll never see that at an in-person Finals. We’ve never had somebody finish in third place with a perfect score—that happened not once, but twice. And we’ve never had anybody finish off the podium with a perfect score, and that happened too. The shooting was unbelievable.”

Next year marks the Hoop Shoot’s 50th anniversary as a national program, and the Elks intend to deliver a gold-medal National Finals for a golden anniversary.

On April 30, 2022, 72 National Finalists will toe the line at Wintrust Arena, a new state-of-the-art, 10,000-seat facility in downtown Chicago. It’s home to the WNBA’s Chicago Sky and DePaul University’s Blue Demons. The 2022 Finalists will step up to the same line as some of basketball’s best.

“It sure would be nice to fill many of those seats with Hoop Shoot fans,” said O’Kelley. “We’ve all missed our Hoop Shoot family, and we look forward to connecting with you in the fall.”

You can watch the Friday Finals Reveal show on the ENF’s YouTube channel. Visit enf.elks.org/2020FinalsReveal to watch!

The Elks have been developing gritty kids through the Hoop Shoot program for nearly 50 years. For 2021-22, the Elks National Foundation allocated more than $1.1 million to fund the program. For videos, news from the court, and more information about the Hoop Shoot, visit elks.org/hoopshoot.