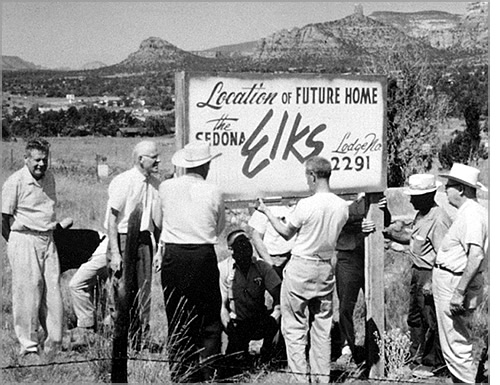 Early in 1963 a committee of Elks in Sedona was formed to institute a new lodge here. The committee was composed mostly of members of Jerome Lodge No. 1361. Gene Munson was made Chairman of the organizing Committee. Other members included Doug Garbutt (who became the first Exalted Ruler), William L. Brown, Milt Dunn, Cy Weber, Tom Mason, Lyle Commings, Wesley Jackson, Dan Kingman, and Harold Feightner.

At the Institution of the Lodge on November 23, 1963, in the Sedona School auditorium, there were 242 members total comprised of 67 transfers and 175 initiates. The Lodge held its meeting in the dining hall of the Old Sedona Lodge, owned at the time by one of the Charter Trustees, Harry Crittenden. It was on a portion of the property where the King’s Ransom Motor Hotel is now located. Harry had plans to remove the Old Sedona Lodge facilities and construct a modern motel. So the Lodge was forced to make plans of its own to have a meeting place.

Three members of the Lodge (William L. Brown, E.R., Harold Feightner and Gene Munson) formed the BFM Co. for the purpose of obtaining land and constructing a building thereon, to Lodge specifications, for rental to the Lodge. On August 24, 1964, the BFM Development Co. voted to purchase approximately 3 acres of land from Fred C. Bretcher, Jr., and Jean T. Bretcher, his wife, for the full price of $10,500 cash.

On approximately October 1, 1964 ground was broken for the new Lodge building. In February 1965, the Lodge began to meet in the new building which has been “home” since that time. The dedication service was held December 11, 1965. Milt Dunn, E.R., with special guest, R. Leonard Bush, GER, and Horace R. Wisely, PGER, hosted the ceremony.

On September 2, 1965, the BFM Development Co. voted to donate, as a gift, all shares of stock to Sedona Lodge No. 2291, together with all assets and liabilities. The Lodge later accepted the offer and the Agreement of Transfer was signed by all parties and acknowledged by Leonard S. Sharman, Notary Public, on November 18, 1965.