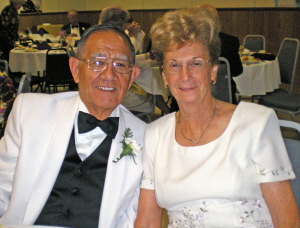 On September 17, 1957 an organizational meeting was held at the Community Center for the purpose of starting an Elks Lodge in Sierra Vista. The visitors present to assist in getting an Organizing Committee started were: M. F. McPherson, David Ruth and Paul Durrett from Bisbee Lodge No. 671 (Mother Lodge), and V. Stewart and District Deputy Grand Exalted Ruler (D.D.G.E.R.) Elman Pace from Safford Lodge No. 1607. D.D.G.E.R. Pace opened the meeting and explained the procedure for instituting a new lodge. In compliance with Grand Lodge Statutes, D.D.G.E.R. Pace then called for the election of a Chairman, Co-Chairman, Secretary and Treasurer for the organization committee. L.E. Williams was nominated and elected Chairman by acclamation. Gerald O’Hare was elected Co-Chairman, Eddie Martin was elected Secretary and Carl Kimble was elected Treasurer. After the elections were completed, D.D.G.E.R. Pace immediately turned the Chair over to L.E. Williams to put the organizational wheels of Sierra Vista Lodge into motion.

The efforts of our founding Members were realized on January 27, 1958 when Grand Exalted Ruler H. L. Blackledge of the Benevolent and Protective Order Of Elks (B.P.O.E.) granted Sierra Vista Lodge No. 2065 its Dispensation. The crowning achievement of their effort, however, was realized on February 24, 1958 when Sierra Vista Lodge No. 2065 had the honor of attaining three firsts in the history of Elkdom. First, it was the first time that a Lodge had been instituted in such short a period of time from when an organizing committee was formed until a Dispensation, institution of the Lodge accomplished and a Charter granted (the Grand Lodge granted our Charter at a regular session of the Grand Lodge held on the 10th day of July 1958). Mrs. Frank Storment inscribed the Charter member names appearing on our Charter. Second, it was the first time any Lodge had ever been instituted in its own building.

For the record, Sierra Vista Lodge No. 2065 was instituted on February 24, 1958. On this same date one hundred seventy eight members became Charter members by affiliation or initiation into our newly instituted Elks Lodge at No. 1 Elks Lane (on land donated by Mrs. Margaret Carmichael). We are still located at our original site. More than 350 Elks, new members, and guests from throughout the State, attended the ceremonies. Thirdly, it was the first time a Lodge building had ever been dedicated the same evening the Lodge was instituted. It is evident the realization that “a building is made with wood and beams, but a Lodge is built with Love and Devotion” was foremost on the minds of our founding members. Brother L. A. Lewis, Past Grand Exalted Ruler (P.D.G.E.R.) from Anaheim, California, attended the institution of our Lodge as our honored guest. Brother Lewis was welcomed to Sierra Vista by police escort. During his remarks to the members and guests, P.D.G.E.R. Lewis lauded Sierra Vista Lodge No. 2065 on its numerous accomplishments and the distinguished “firsts” it had set for Elkdom. Upon approaching the Lodge he said, “I have never seen anything like this in my life”.

Following the ceremonies, P.G.E.R. Lewis added that in his many, many years in Elkdom it is the first time he had attended an institution meeting where the closing ritual was given from memory, rather than from notes. Exalted Ruler Hugh Dugan, Jr. and officers of Bisbee Lodge No. 671 conducted the initiation of Charter members of Sierra Vista Lodge No. 2065. Past Exalted Rulers (P.E.R.s) from Lodge’s throughout the State conducted the installation of Officers. H. W. Ratliff, a P.E.R. from Yuma Lodge No. 476 acted as Grand Exalted Ruler for the Installation ceremony. D.D.G.E.R. Elman Pace from Safford Lodge No. 1607 and A.E.A. President John Frakes from Tucson Lodge No. 385 arranged the installation ceremonies. Dignitaries of note in attendance were: L. A. Lewis, P.G.E.R., Elman Pace, D.D.G.E.R. and John D. Frakes, A.E.A. State President. Our Charter Officers for Sierra Vista Lodge No. 2065 were: L. E. Williams, Exalted Ruler, Harold Clark, Esteemed leading Knight, Dale Blan, Esteemed Loyal Knight, Elmer Retzlaff, Esteemed Lecturing Knight, John Dragoo, Esquire, Joe Rustin Secretary, Carl Kimble, Treasurer, Ed Ryan, Tiler, Hal Hartwig, Inner Guard, August Quenon, Chaplain, Jim Rustin, 1-Year Trustee, John Kelly, 2-Year Trustee, and Jack Sabin, 3-Year Trustee. We would be remiss if we did not acknowledge that our Elks ladies organization also had their beginning in 1958.

Doubtless, the Elks ladies organization is our Lodge’s most loyal and staunchest support group. The first President of the Elks ladies was Gama Williams. On November 23, 1993, we amended our Bylaws to recognize the Elks Ladies as the official Ladies Auxiliary of Sierra Vista Lodge No. 2065. Since our institution on February 24, 1958 the officers and members of Sierra Vista Lodge No. 2065 have continued to promote and support the programs of the Grand Lodge. On numerous occasions, we have been singled out at the Grand Lodge and State level for our accomplishments. For example, each year the Grand Lodge selects a first place winner from each of the six divisions for “All-American Lodge” honors from over 2,200 subordinate Lodges throughout the Order. The All-American Lodge award is the most coveted of all the Grand Lodge yearly awards.

Our Sierra Vista Lodge has been selected as an “All-American Lodge” three times (1988-1998, 1991-1992 and 1994-1995). We are extremely proud of this accomplishment and realize it would not have been possible without the continued support and participation of the membership and ladies of our Lodge. In addition, although we are a relatively small Lodge, Sierra Vista Lodge No. 2065 has produced two AEA State Presidents, eight A.E.A. Vice Presidents, and nine District Deputy Grand Exalted Rulers. Our Sierra Vista Lodge has also produced eight State Ritual championship teams, which is a testimony to the proud ritual tradition, started on the day our lodge was instituted. Yes my Brothers and Sisters, the great heart of Elkdom truly swells and throbs with in the hallowed walls of Sierra Vista Lodge No. 2065. To our founding members, we say “thank you” for a job well done. We will never forget your efforts and we will strive to continue to build on those efforts. Perhaps P.E.R. David Dean said it best with his slogan “Honor the past, embrace the future”. Homer M. Sylvers, Jr