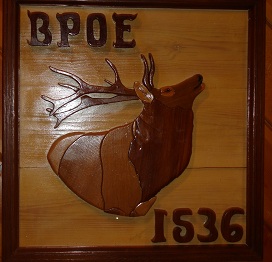 "The Elk's Alphabet" (Written on the Elks' Fiftieth Anniversary) By Bro. Raymond A. Browne New York Lodge No. 1 BPOE The "A" is for "Altar," where proudly repose The Three Precious Symbols that ev'ry Elk knows. The "B" is for "Brother, a word that we love; It makes us all kin, does the term from Above. The "C" is for "Charity, noblest of deeds; It carries a blessing in each of its seeds. The "D" is for "Discord" we never have known, And "Duty," that bids us to take care of our own. The "E" is for "Eleven," the hour of prayer, When "Our Absent Brothers" our loving thoughts share. The "F" is for "Fidelity," ne'er does it lag; Just now it bids us to stand up for our Flag. "The "G" stands for "God," the Omnipotent King, Whose children we are, and whose praises we sing. The "H" is for our "Home," where a welcome awaits, The "Wandering Elk" who has come to our gates. The "I" is for "Initiate," waiting the words, That makes him an Elk, with a place in the herds. The "J" is for "Justice," impartial and free, Yet tempered with Mercy, as Justice should be. The "K" is for "Knowledge," that thrills you and me, That all the world honors the "B.P.O.E." The "L" is for "Lodges," all over the land, About fifteen hundred, and many more planned. The "M" is for "Mem'ry," of each bygone prince Who helped found our Order, just fifty years since. The "N" is the "Nation" of which we're a part, And love for it burns bright in ev'ry Elk's heart. The "O" is for our "Order," and likewise our "Oath," As long as life last, we'll be faithful to both. The "P" is our "Pockets," that we reach in, and quick, To help the distressed, and the poor, and the sick. The "Q" is the "Queens" of our hearts and our lives, Our Mothers, and Sisters, our Sweethearts, and Wives. The "R" is "religion," we know only ONE: To do good to all, and do evil to none. The "S" is the "Star" that looks down from above, And sheds on our Altar the radiance of love. The "T" is for "Time," with his scythe and his glass; He bids us remember, "Do good as ye pass." The "U" is the "Unknown," where are Brothers of old, Found rest when the story of life was all told. And "V" is the "Vision" that sometimes seems plain Of that Other World where we'll meet them again. The "W" the "Widows" who call not in vain; We've helped them before, and we'll help them again. "X" that's the "Xample" we set to the world, Wherever the standard of Elkdom's unfurled. The "Y" is for "Youngsters," for someone has told How Elks are all children who never grow old. The "Z" is the "Zeal" that we have for the Right; The Alphabet's ended; I thank you - Good Night! 2. FAMOUS ELKS Famous Elks Military General John Pershing (NY Lodge #1); Captain Eddie Rickenbacker 70,000 Elks served in WWI (1,000 gave their lives) 100,000 Elks served in WWII (1,600 gave their lives) Politicians Presidents of the United States: Warren G. Harding; Franklin D. Roosevelt; Harry S Truman John F. Kennedy; Gerald R. Ford (Grand Rapids Lodge #48) Members of Congress Tip O'Neill; Carl Albert; John McCormick; Hale Boggs William F. Knowland Oakland, California # 171 Sam Rayburn; Tom Foley (Spokane, WA Lodge); Business People Jim Cramer; Julius Curtis Lewis, Jr. Caleb Bradham,Inventor Pepsi Cola, Past Exalted Ruler New Bern, NC #764 Entertainers Lawrence Welk; Will Rogers; Jack Benny Andy Devine, Past ER of San Fernando,CA Lodge #1539 Clint Eastwood (Monerey Lodge #1285); Gene Autry; Richard Moll William F. Cody (Buffalo Bill) Donald O'Connor; Billy Barty Sports figures Honus Wagner; Vince Lombardi; Jim Finks Casey Stengel; Mickey Mantle; Whitey Ford; Zack Wheat