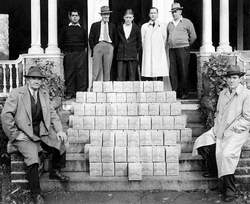 ROCHESTER, NH — Four members of the Wallace family, owners of the large Wallace Shoe Shop on South Main Street, built fine homes within easy walking distance of their factory. The only one remaining is the St. Charles Children's Home on Grant Street.

Albert Wallace was the oldest son of Ebenezer G. Wallace, who with his twin brother, Edwin, founded Wallace Shoe. After graduating from Dartmouth College in 1877, Albert joined the family manufacturing business. A wealthy man he was also involved in other large business enterprises in manufacturing, banking and railroads. Around 1896 he built a 20 room house with a circular front porch, third floor cupolas and a turret on South Main Street. His beautiful residence was noted for its conservatory and artistic and well kept grounds.

Albert died in 1916. In 1926 the local Elks Lodge purchased the estate for their use. The $25,000 price was paid with bonds due over a term of years. Eighty-five percent of the membership subscribed in varying amounts.

The house had been kept in top notch condition so very little needed to be done to it. Downstairs the Elks had their main reception and living rooms. Upstairs were a billiard room, library and radio room, and a ladies room. Ten bedrooms were for the use of traveling Elks and their wives. A steward and his wife were in attendance at all times to take care of the house and serve some meals.

Plans included having a dance floor in the former carriage house/garage to hold smaller social events there to save on renting the Opera House for their functions. One of their biggest events, their annual Elks Charity Ball, was a leading event at the Opera House for years.

One of the Elks' first public activities was an impressive Flag Day celebration at the Opera House. As a patriotic organization the Elks lead annual Flag Day observances, including one in 1923 when the Elks marched into the Opera House to music from Rochester's Hanson American Band. Patriotic selections, readings, and a drum solo by a Civil War veteran who came down from Bristol to "wake people up a bit," were followed by a speech by the Congregational minister. He called the flag a symbol of unity and urged travel as a way to get a better perspective. He said Henry Ford had given Americans a magic key in the $400 Ford that provided unprecedented opportunity for traveling.

The Elks are strongly committed to charity. Some of their early fundraisers were highly successful Winter Carnivals held to benefit the Rochester Hospital. A fifty cent admission fee to one held at William H. Champlin's farm on Rochester Hill in 1922 paid for all activities, including transportation from downtown on barges, hayrides, sleds and trucks. In 1923 it was held at the Rochester Country Club with a wide variety of winter events, including ski races and jumps, obstacle races, toboggan runs, baseball games on snowshoes, and sled dog rides.

Around 1966 the Elks purchased land on Columbus Avenue behind their house and built their current building. The house was demolished and a contemporary two story office building with a façade of white glazed brick and plate glass windows took its place. When Community National Bank opened there in May 1968 it was called "completely modern in every respect" and featured walk-up and drive-in windows and parking for 50 cars. It has since been occupied by other banks, including Indian Head, Fleet, and currently Bank of America.