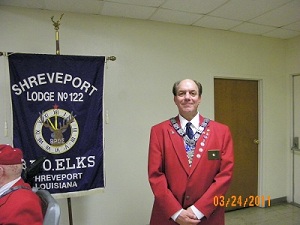 On June 29, 2014, Shreveport Elks Lodge lost a very important person, James Larry Shelton. His service will be at the lodge on Thursday from 4:00pm till 7:00pm. At first, I contemplated changing my E.R. Message and honestly, felt like shutting everything down in honor of Larry, but our Brother would expect all of us to grab our bootstraps and trudge on. The last thing Larry said to me was, “Don’t worry. It’ll all work out. It’s all good!” He was usually right. So, in honor of Larry, my friend and mentor, our beloved Brother, here is my original message for July:

In Memory of our Fallen Brother, James Larry Shelton, PER
Many we love have passed away too soon, without reason. We remember them often in a thousand ways: in the morning, in the night, when we look at the star, a date, a song, a place or even a smell. As we reflect upon our Brother Larry, most of us will remember him for his deep raspy voice, his high energy level and his love for everyone. He gave his all to Lodge 122 and he made his dreams of the Lodge come true. From the moment you turn into the Elks drive way…until you’re standing on the back deck, you can see Larry everywhere. The LED sign, cell tower, security cameras, bar renovation, cash registers, tinted windows, bandstand, bridal suite, new paint throughout the lodge, and the back deck are just a few of Larry’s dreams come true, that will remind us of him each & every day.
Larry was also a people person. He loved having a good time and was always the life of the party. He always had a good thing to say to you no matter what mood he was in. When he’d slap you on the back, shake your hand or give you a kiss and say “It’s good to see you!”, he genuinely meant it. He would never hesitate to take your phone call, no matter how busy he was. From helping the bar tenders when they’d run out of something, to chopping food for a cook, he was there to lend a helping hand. Larry was a great friend and mentor to all of us.
Larry has accomplished more out of life than some of us put together. He was our 2012/2013 Exalted Ruler, and received numerous awards for his Elkdom dedication. He received “Top Recruiter Award from the Grand Lodge for 2010/2011, 2011/2012, and 2012/2013. In 2012/2013, the Grand Lodge also presented him with “Making a Difference Citation” and “Outstanding Service Citation” awards. At the 2013/2014 Louisiana State convention, Larry was awarded the “Steve G. Jenkinson Award – Louisiana Elk of the Year”. Upon his death, he was our Fourth Year Trustee.
Outside the Lodge, Larry had his own striving business to run. He shared his life with his loving wife Cyndra and son Jacob. He loved his family, friends and fellow Elks. He will never be forgotten, always remembered with joy and laughter.
To our Absent Member! Rest Easy Brother