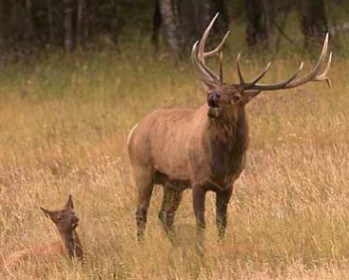 The BPOE adopted several fraternal traditions similar to the Masonic Fraternity. An altar, decorated with the Holy Bible, is found in the center of every Lodge throughout Elkdom. Old Glory served as the altar's drapery until 1956, when it was given its own distinct place of honor to the right of the altar. An "Exalted Ruler" governs each Elks Lodge as the "Worshipful Master" does in a Masonic Lodge.

Elk Officers wear formal evening dress (tuxedos) during the Initiation Ritual and other ceremonials of the Order. Since 1874, the Exalted Ruler and officers of every Elks Lodge began wearing the new Elks regalia, composed of a purple velvet collar with a small, fawn colored roll and a jewel with an Elk's head with a gilt edge on the collar.

A "Tiler" guards the entrance of every Elks Lodge, and this officer prevents all outsiders from entering a Lodge without proving themselves to be an Elk in good standing.

The BPOE originally utilized a two-degree ritual; the second degree was discontinued in 1890. In fact, the BPOE Grand Lodge has outlawed any side degrees. The solemn and dignified BPOE Initiation Ritual of today is vastly different from the Initiation performed within our Lodges in those early days, with the early minutes of several Lodges, describing the now-solemn ritual in a far different vein.

Early candidates found that a physician's certificate of examination was necessary as a part of the joining process, and the male prospect had to be in top condition to even be considered. Then, once the candidate had met that criteria and was in the Lodge room, he was blindfolded, and instead of dimmed lights and beautiful words, he was subjected to much horseplay. The minutes of the Ashland Lodge No. 384 describe in detail of their candidates wearing shoes with lead soles designed to make the wearer walk as though intoxicated.

The old Ritual Book spells out other trickery, with members agreeing with the Exalted Ruler's declaration that the candidates be "shaved." Once this decision was made, a "City Barber" appeared to the blindfolded candidates whereupon, with a dull file simulating a straight razor, he literally scraped the faces of the men to "shave" them. A few other jokes, all of which were contained in the Ritual Book, described each ordeal in great detail, such as "walking on broken glass," actually egg shells, and it even mentioned how to end the "horseplay" session with real guns, loaded with blanks, being fired off behind the now-weary and very confused new members.

In 1895, the Elks ceased the use of lambskin aprons in their initiatory work, the password was eliminated in 1899, in 1902 the use of a badge was eliminated, with the secret grip falling by the wayside in 1904 and the "Test Oath" was removed in 1911. In 1952, candidates were no longer blindfolded prior to the Initiation. 1995, women were admitted into the Order.