In the proud history of the Order of Elks, the greatest successes in charitable endeavors have arisen from challenges that could not be met by one person alone, but that could be addressed wonderfully by a group of dedicated people and Lodges. 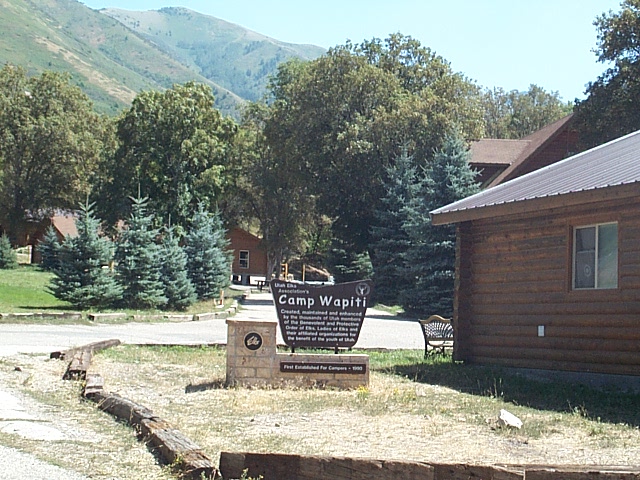 The main building of Camp Wapiti has a large dining room, kitchen, and quarters for camp counselors. The building is dedicated to the memory of Kent Wheelwright, an Elk who contributed much of the construction of the camp.

Such is the story of Camp Wapiti, the State Major Project of the Utah Elks Association. The project has not only serviced a need of the community, the camp has fulfilled the desire of the Utah Elks to provide a significant and enduring benefit to deserving people of the state of Utah.

Established as a summer camp for medically challenged youngsters, still its primary function, Camp Wapiti is gradually expanding its role in its service to the state, Tooele County, and the city of Tooele. Tucked away in a small canyon in the mountains just south of Tooele and about 15 miles from the southern shore of Great Salt Lake, the facility is a tribute to the remarkable cooperation among a number of organizations and agencies.

Ten years ago the Utah Elks Association, seeking to expand its major project activity, was investigating the charitable needs of the state. At the same time, several organizations devoted to serving medically challenged children were looking for camping facilities that could provide consistent service and medical-supervision capabilities in a safe environment close to a major hospital. 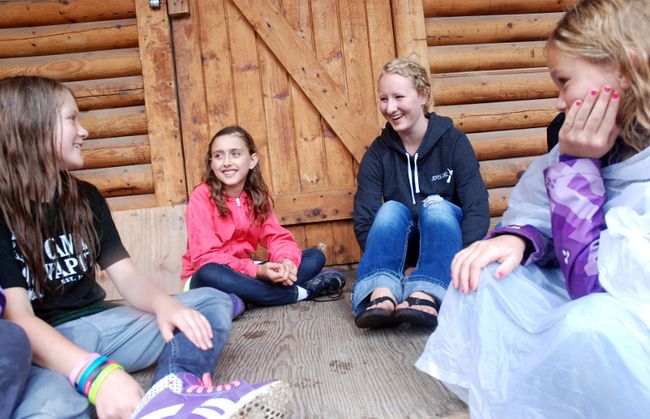 The organizations, which included Utah affiliates of the American Cancer Society, American Lung Association, Cystic Fibrosis Foundation, American Diabetes Association, and the National Hemophilia Foundation, had formed an unofficial association to locate such a camp that could be utilized by the children each organization served. Dubbed the "Coalition," the groups were to become the core agencies working with the Elks to establish the camp.

The Coalition worked initially with Eldan Hill, then the Utah major project chairman, to identify the diverse needs of the youngsters the camp would serve and to begin the process of locating and procuring a site as well as planning the facility. A former Girl Scouts camp near Tooele was selected. It was near the major population area of the state, was within two miles of medical services, and could be leased from the city of Tooele for 99 years. At 5,200 feet above sea level, the site was also below the limit established for those with cystic fibrosis.

"Since 1990 it has been a full-court construction effort," says state association Trustee Jerry Dewey, who has been close to the project since its inception. He estimates that in its current configuration Camp Wapiti represents about $1.5 million in donated cash, volunteer labor, and contributed services. 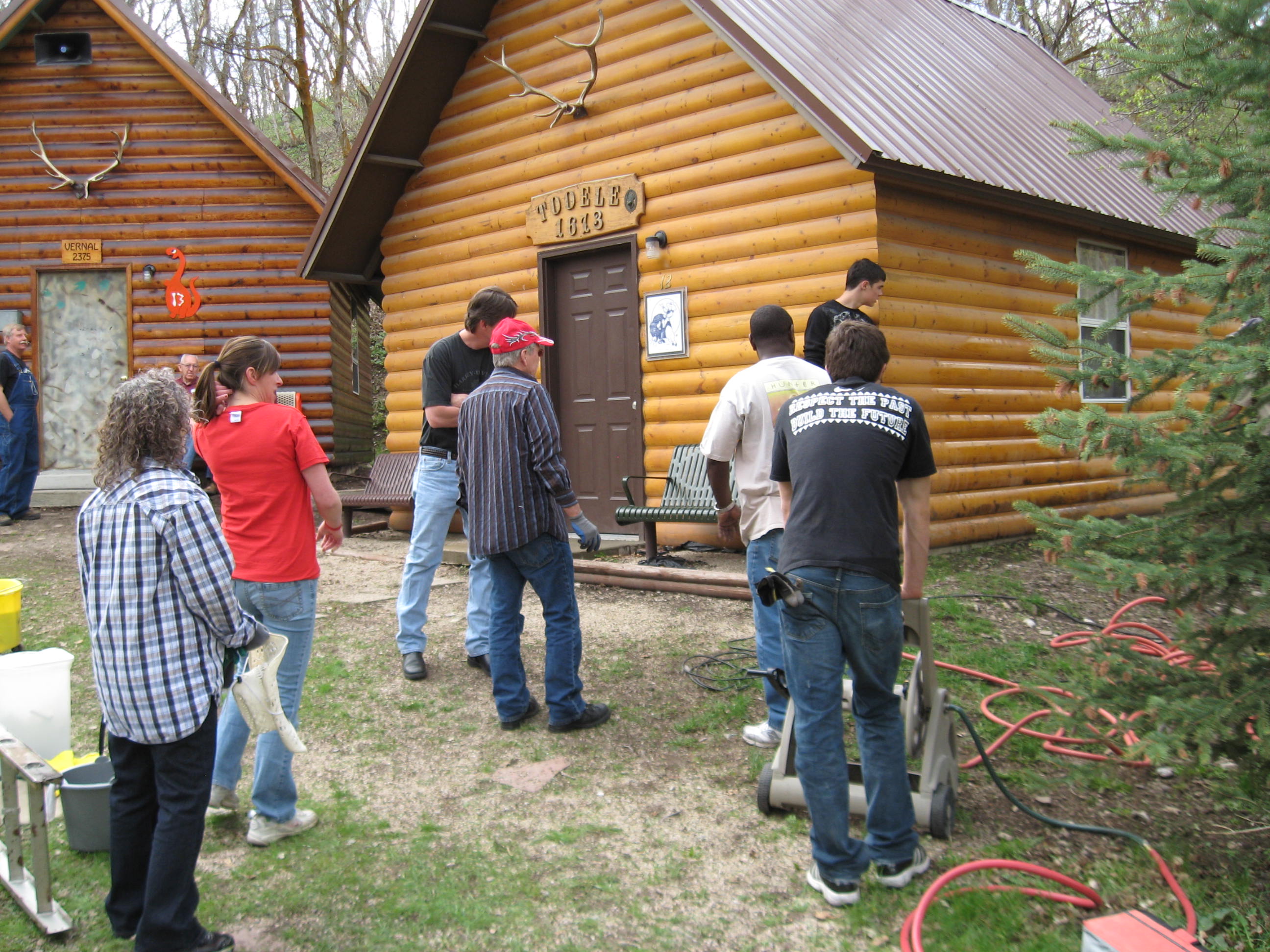 The camp is on an eight-acre parcel that is surrounded by 1,600 acres of wilderness beauty. One is more likely to see an abundance of mule deer than the elk for which the camp is named. (Wapiti is a Shawnee name for elk derived from the term meaning "white rump," a notable characteristic of the animal.)

Seventeen cabins are in place, each constructed and sponsored by a Utah Elks Lodge. While sharing a common floor plan, the cabins nonetheless have individual looks. "Each one shows some of the personality of each Lodge," says R. C. Smith, a PSP from Tintic Lodge. He points out that the Lodges gather at the camp in May for a spring cleanup to prepare the camp for the summer's activities.

The centerpiece of the camp is the main lodge, an imposing log building containing a large dining room, a commercially equipped kitchen, and dormitory quarters for camp counselors.

The Coalition recently installed a plaque dedicating the structure to the memory of PSP Kent Wheelwright from Bountiful Lodge. He is credited with inspiring the volunteer effort that brought the project to fruition.

The state Ladies of the Elks (LOE) organization and the Does Drove of Ogden are credited with being an original driving force in the production, too. The LOE adopted the camp as their major project, having raised $200,000 so far for Camp Wapiti. The ladies' early efforts were devoted to helping fund the dispensary building, where special on-site medical and pharmaceutical attention is provided for the campers by the agencies using the camp. The ladies are currently providing finances for a new arts-and-crafts building planned for the camp. "This thing just would not have happened, had it not been for the ladies," says Dewey.

Reflecting on the involvement of the LOE and the Does in the project, Geri Lyons, a PSP of the LOE, notes, "It's nice to work for something worthwhile." She points out that the ladies have conducted raffles, run car washes, and served meals, among other activities, to generate funds for the camp. Adds LOE Past Supreme President Helen Andersen, they are involved because "you can see the kids benefiting."

During the camping season the state association has a resident host to look after the needs of the organizations and youngsters using the facilities. James "Sully" Sullivan is the current official host, living in his own travel trailer for the season. Sullivan, a PER of Price Lodge, also supervises the ongoing construction projects, currently seeing to the completion of a bathhouse for the camp's swimming pool. He has been on the scene to witness the efforts of all the diverse groups that have worked to help the camp and its beneficiaries. He points to the involvement of city and county agencies, firefighters and law-enforcement personnel, and even the military help from a nearby U.S. Army installation in improving and maintaining year-round access to the camp.

The community connection to Camp Wapiti is also noted by State Major Project Administrator Bob Jarvis, a PSP from Park City Lodge. He says the public perception of the camp and of the Elks has been greatly enhanced by the support received from other private organizations, church groups, state agencies, and charitable foundations, one of which has provided more than $110,000 in matching grants to Camp Wapiti. "It's definitely been a group effort all the way," he says.