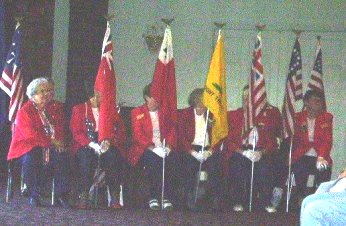 Our Name EMBLEM:
Signifies the Flag of the United States of America,which is preserved and cherished as a priceless possession.
· Dedicated to Charitable Acts in the Community, the States, and the Nation.
· Dedicated to Unite all Emblem Clubs in closer bond while furthering good fellowship among the members.
· Dedicated to Promote and protect the interests of Clubs and to Bear True Allegiance to the Constitution and Flag of the United States of America.
The Emblem Club Motto - TRUTH, JUSTICE, and CHARITY and is the guide in all Club Work.
Emblem Club Membership Application

The Supreme Emblem Club of the United States of America ® Website


WHY BECOME A MEMBER OF EMBLEM CLUB?
· It is Pride in Belonging!
· It is Exciting?
· It is Motivating?
· It is Accomplishment!
· It is Rewarding!
· It is commitment to the Values of Caring!
· It is an Opportunity to Make a Profound Difference!
We associate ourselves to respect and honor the American Flag; to foster and perpetuate Patriotism; to promote Fellowship; to involve ourselves in Community Service ... with emphasis on the homeless ... the aged ... the handicapped ... the veterans ... our youth ... drug awareness and literacy programs. To promote family involvement in our projects ... to promote joint projects with the Benevolent and Protective Order of Elks and other civic organizations ... to consider membership in Emblem Club an opportunity to serve ... to focus on our continuing growth ... to offer our talents ... by being an asset to society ... to improve the quality of life in the communities in which we reside.
Our Members Say ... Emblem Club embraces participation ... offers challenge ... enhances self-esteem while building on the tradition of our founders ... that bettering the lives of others is truly the greatest of all achievements...as well as establishing higher ideals in every day living.
We extend an invitation to individuals who are eighteen years of age ... American citizens ... sponsored by an Emblem Club Member and a member of the Benevolent and Protective Order of Elks in good standing.

A small group of Elk's ladies began meeting together in 1917 to wrap bandages for World War I. They enjoyed the sociability, and at the same time felt the joy of accomplishment. The combination of assisting others and enjoying good fellowship appealed to other women, and a community group came together.

Fifteen members of a group of ladies in Providence, Rhode Island, related to members of the Benevolent and Protective Order of Elks, who were active under the name of Emblem Club, developed the idea of a national organization of such groups. The organization was chartered in the State of Rhode Island as the Supreme Emblem Club of the United States of America ® by Esther A. Sweeney, Mary T. Duffy, Alice Farrell, Mary L. Clark, and Charlotte O'Conner of the "original fifteen", on April 27, 1926, and filed in the office of the Secretary of State of Rhode Island on May 3, 1926.

Nine Emblem Clubs were organized during the first year in the New England States in Rhode Island, Massachusetts, New Hampshire, and Connecticut. This number has steadily increased and now, in more than seventy years of formal existence, Emblem Clubs are located in every section of this country, including Alaska and Hawaii. With this organization continuously progressing, the future of Emblem is even more promising.

Americanism
The organization was incorporated in part to bear true allegiance to the Flag and Constitution of the United States of America. A formal program was adopted in 1965, at which time it became mandatory to promote a plan of action in each Club. In addition to the monthly programs, members are urged to become involved in originating patriotic endeavors and participating with others in these projects.

Community Service
The policy of charity and community service proves of inestimable value in maintaining an enviable reputation for good works by Emblem Clubs in all localities. This Program of giving is the heart of Emblem; and the hundreds of thousands of hours and dollars that are given to others is the glue that binds Emblem members together.

Drug Awareness
This program was initiated because of the alarming problem in this Country and the need for help. Emblem members, vitally concerned with all phases of human health and development and having the resources to spread the word, work and assist financially in local communities in many facets as part of the National Community Service Program.

Grant-In-Aid-Awards
The purpose of this scholarship program is to assist those Emblem members and/or relatives of current Emblem members who are serious about continuing their education but, due to a physically challenging situation, are unable to meet the high criteria applied to the Scholarship Award Program.

Literacy
Helping another person to read is one of the most rewarding contributions that can be made. Emblem members volunteer as tutors and donate time and monies to the "Literacy" program in various communities. "Literacy in America - Emblem Makes A Difference" has been adopted as a National Community Service Program.

National Disaster Fund
This fund was created to give immediate relief to Emblem Club communities and members. It was created in 1964 as a result of the Alaskan earthquake, and is sustained by voluntary donations from Clubs, State Associations, and members. The Fund was established for future benefit of members suffering loss caused by fire, flood, tornado, hurricane, earthquake or the like; and to assist the Lodge of a local Benevolent and Protective Order of Elks of the United States of America located in a community that has been struck by disaster.

Supreme Scholarship Awards
The program was established in 1934 to assist worthy applicants in obtaining advanced education in their chosen field of endeavor. Scholarships are awarded to members and relatives of current members and applications are submitted through the affiliated Emblem Clubs. The program is sustained by voluntary contributions of Clubs and individuals, and contributions are given in memory of or to honor friend and family members. Individual Emblem Clubs and the State Associations also assist the youth of today through local and state scholarships as Emblem members work proudly to assist the deserving students as they attempt to better equip themselves for life.
e