Home Service Program of the UCP Association of NY State 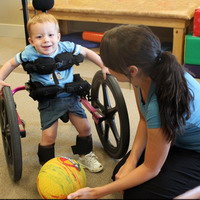 The Home Service Program, concentrating on individuals with Cerebral Palsy, is a collection of 27 Home Service Directors and the vans that the directors use to provide individualized services to adults and children with disabilities and their families in their home communities. Since inception, the program has grown to encompass every county of New York State. The staff provide referrals for appropriate evaluation and program services, advocacy, counseling, follow-up and program development.

In the late 1940's, parents of children with cerebral palsy and other disabilities were constantly frustrated by the lack of services to meet their children's special needs. A number of these parents banded together to advocate for solutions and founded United Cerebral Palsy Associations of New York State, Inc., (UCPA/NYS). Upon sharing their mutual concerns, it became apparent that hundreds of people with disabilities were homebound due to a lack of knowledge and experience in providing for their needs and that ultimately, the heaviest burden of day-to-day care was borne by families in their homes. Hence, UCPA/NYS resolved to seek out and develop the necessary array of community-based services to support persons with disabilities and their families.

On March 15, 1964, representatives of the New York State Elks Association and the UCPA/NYS met to discuss a joint venture that would benefit children and adults with disabilities and their families. As a result, the NYS Elks Service Program was adopted as an Elks Major Project. Since that time the New York State Elks Association has contributed over $10 million to the UCPA/NYS for the Home Service Program including $460,000 in the last year.

Currently, Cerebral Palsy Associations of New York State is a broad-based, multi-service organization encompassing 24 Affiliates and 18,000 employees providing, supports, services and programs for more than 100,000 individuals with cerebral palsy and developmental disabilities and their families throughout New York State.

NYS Elks Home Service Program- A case manager can be available to assist individuals in short-term linkage and referral to services available in their communities. To qualify for Home Service Director assistance, a person would have similar needs as someone with a developmental disability.