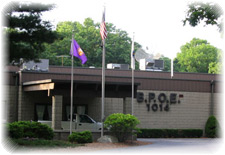 Our Attleboro, Massachusetts Lodge of Elks #1014 is situated on 26 acres of land in a rural part of Attleboro. The lodge was incorporated in the city of Attleboro in 1906 and currently has over 800 members.

The original lodge was housed in a rented space in the Odd Fellows Building on Bank St. In 1929 we moved to a new lodge building between Pine and Union Streets and resided there until 1980. At that time, a modern facility was constructed at our present location of 887 South Main Street, Attleboro, MA 02703.

Our Lodge holds the distinction of having the largest function hall in the city. Many couples have enjoyed their wedding celebration at our function hall and businesses routinely host functions as well as business meetings there . We also host the largest Bingo in the area which, on average, has over 200 people attending every Sunday evening. We have an outside pavilion which is 72 by 40 feet with a covered BBQ pit. Our Pavilion is capable of holding functions for 200 or more guests. Along side of the Pavilion, we have several professional Horseshoe Pits which were built by our Horseshoe Committee. The members of that committee have won the New England Horseshoe Championship on several occasions.

The Benevolent and Protective Order of Elks main thrust is Charity and our lodge is proud to stand as the community leader in charitable donations. Our charities range from Senior Citizens, Special Needs Citizens, Veterans, Boy and Girl Scouts, 4H Clubs, local Youth Sports Teams, local Police and Fire Departments, as well as any other worthy charitable request. These donations amount to approximately $50,000 each year.