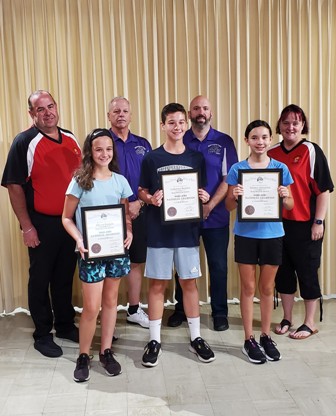 The Rochester, NH Elks Lodge #1393 hosted an awards event in their Lodge Hall at 11AM  on Saturday, August 28th, 2021 to honor 3 Youth Soccer Shoot Contestants who were crowned National Champions in the Elks Nationwide Soccer Shoot Contest for the 2020-2021 Season. These 3 winners represented the Rochester Lodge throughout the various levels of competition.

The gathering included friends and family of the contestants, as well as Members and Officers of the Rochester Lodge. Also in attendance were the Co-Chairs of the NH State Soccer Shoot Committee, Kevin Lincoln, PER, PDD, State Treasurer from the Plymouth Elks #2312 and Megan Arlitt, PER, PDD, State Elks Secretary from the Derry-Salem Elks #2226.

Exalted Ruler Jerry Skidds, PER, PDD from the Rochester Elks opened the ceremony with a brief message welcoming the winners and their families, followed by comments from Esteemed Leading Knight and 20/21 Lodge Soccer Shoot Chair Matt Sanborn. Kevin Lincoln and Megan Arlitt presented the contestants with certificates and pins. Exalted Ruler Jerry also presented the kids with Elks National Convention Newsletters that contained an article about the national winners and Lodge pins. Pizza was served following the ceremony and pictures.

Soccer is one of the fastest growing youth activities in the country. The Elks Soccer Shoot Program is geared to coincide with this sport phenomenon. From toddlers to teens, in our large urban centers to our small suburban settings, soccer is becoming the sport of choice for our youth. This program is the kind of sporting event to help keep our youth focused and away from undesirable activities.

The Elks Soccer Shoot program consists of two different contests that test different level skills at different ages. A "Five Goal Contest" consists of a series of five goals, decreasing in size from 48 inches to 17 inches. The age group that uses the goals in this contest are U-8 for ages 7 years old and younger. The contest is open to boys and girls who shoot separately. The U-8 contestants kick from 15 feet from the face of the goal.

The Grid Goal Contest consists of a full-size goal sectioned off so points can be scored when the ball is kicked into certain sections. The age groups that use this goal are U-10, for ages eight and nine, U-12, for ages ten and eleven, and U-14, for ages twelve and thirteen. The contest is open to both boys and girls and they shoot separately.

Winners at each contest are eligible to advance to the next of competition. The levels are Local Lodge, District, State, and Region. Winners at both the State and Region levels will have their scores sent to the national level to determine a National Champion in each of the age and gender groups.

The next annual Rochester Elks Soccer Shoot will be held on Saturday, September 18th at the Roger Allen Soccer Field, with registrations starting at 9:00 AM, and the contest to run from 10:00 AM to Noon. Remember to bring your child’s birth certificate for registration (required to verify age). Contestant’s age is determined by their age as of January 1st, 2021. The event is open to boys and girls from ages 7 and under to 13. Trophies are presented to the top three boys and girls in each age group. For more information contact Lecturing Knight Deanna Souza.