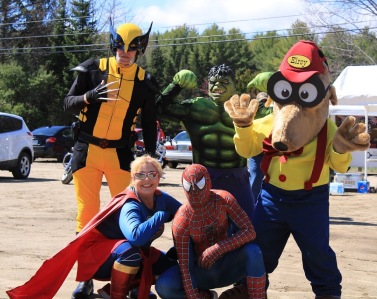 The Rochester Elks #1393 conducted its annual Kids Fishing Derby on Saturday, May 1st, 2021 at the Farmington Fish and Game Club in New Durham, NH. This event was open to children and grandchildren of Rochester Elks Members.

18 kids ranging in age from 5 to 12 signed up to compete. Registration started at 7:30 AM and the Derby kicked off at 8:00 AM, with the National Anthem being sung by Elks member Leslie Dale.

During the contest, a surprise visit to the site was made by the “Superheroes” who showed up on their motorcycles to visit the kids. Elroy the Elk was also in attendance. Fishing was paused for a brief time so the participants could visit with these famous celebrities. Special thanks to Elks member Bill Lemelin for his “Superhero” Support!

Fishing was concluded at 11:00 AM. Over 50 fish were caught by the contestants! A Barbeque lunch of hotdogs, hamburgers, chips, desserts and soft drinks were served, and then the winners and participants were announced:

Special thanks to all individuals and organizations who supported fund raising and made donations to make this even possible. Your generosity is greatly appreciated. And a huge “thank you” to the Farmington Fish and Game Club in New Durham, NH!

For more information about the Elks, please visit www.elks.org