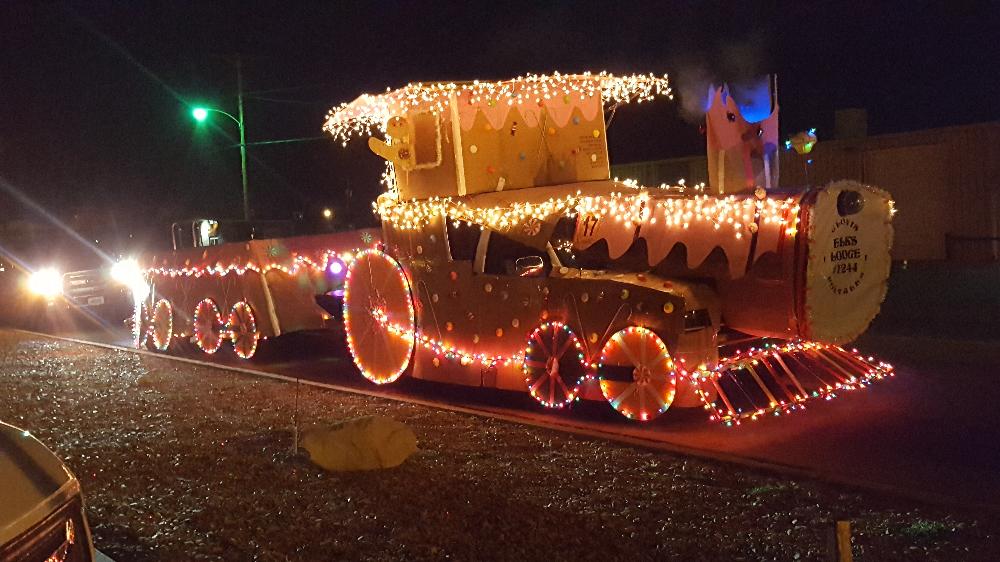 For the first time in more than 14 years members of the Clovis-Portales Lodge took part in Clovis' annual Christmas Light Parade.

Lodge #1244's Activities/Entertainment Committee used the parade's theme of "Christmas Express" as inspiration and chug along back into the city's popular holiday event.

With the theme in mind, members Barbra Powell, Larry Powell, Ramona Hall, Valentino Martinez, Charla Krumheuer, Fred Lybarger Rena Lybarger, Kirk Reader, Vielka Doss, Angelina Garcia and Kelly Brown took a flatbed truck and created a 20-foot -tall gingerbread steam engine with actual smoke.  This year, there were more than 80 light-covered floats that entered in the parade.  There were three divisions for judging the floats, and the Clovis-Portales Elks Lodge #1244 float captured 3rd place and even made it onto the front page of the Eastern New Mexico News.  “We couldn’t have had better weather on this warm December night,” said member Barbra Powell, who dressed as a Santa’s helper.   Powell stated, “We didn’t realize we were making memories, we just knew we were having fun.” The float included 22 members and their families  who enjoyed riding on the float waving to the hundreds of spectators lining the streets in beautiful downtown Clovis.  They passed out candy donated by member, Troy Cortez.

"It was a blast," said Lodge member Valentino Martinez. Hearing children cheer when he sounded the train's horn was a highlight for Martinez who said he also enjoyed the help and support he received from his fellow Elks.