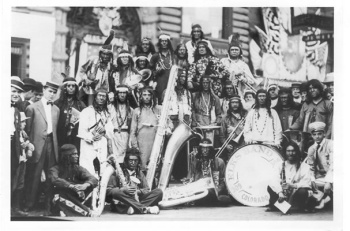 July 31, 1894, a special session of the Deputy Grand Lodge B.P.O. Elks of #674589 Colorado was called for the purpose of instituting Colorado Springs Lodge #288 (correctly changed to #309 in April of 1896). Lodge #288 is the Pendleton, Oregon Lodge. There were 30 charter members who presented themselves for initiation. In April of 1896, the Lodge number was changed from 288 to 309 on the seal. In November of 1896, a motion was made to organize a “club” known as the Elks Club. In February of 1898, a motion was made to purchase lots at Evergreen Cemetery suitable for an Elks Rest. In April, a warrant was drawn for $16.00 to pay for eight lots. In May of that year, the Exalted Ruler appointed a committee of seven to manage and govern the Elks Club for one year. The Exalted Ruler was to be a member of this committee. (This was very likely the predecessor of today’s House Committee.) In 1899, the Lodge determined that no one but an Elk could be admitted into the Lodge and clubrooms except as provided by the rules of the club.

The early 20th century was an active and rewarding time for Lodge #309. The Lodge finally got a home they could call their own in 1902. A new club was to be built on the southeast corner of Cascade Avenue and Bijou Street. On November 11, ground was broken, and exactly one year later the new Elks Club was dedicated. In 1906, Lodge #309 made its debut on the national scene. The National Convention was being held in Denver, and many delegates from around the United States were headquartered in Colorado Springs. In appreciation for their efforts, the Grand Lodge presented Lodge #309 a silver cup. In 1908, our Lodge again premiered on the national scene. The National Convention was held in Dallas that year, and, on July 14th, Rush L. Holland (Past Exalted Ruler of our Lodge) was elected by the delegates of the nation to be the new Grand Exalted Ruler of the Order.

In July 1910, the band (shown above) from Elks Lodge #309 traveled to Detroit to represent the Lodge at the annual meeting of the Grand lodge. The band members dressed themselves in Indian regalia. C. B. Horn was the drum major of this splendidly attired 40-piece band. At some point during the teens, the Lodge dedicated the bronze elk statue that stands in the Elks plot in Evergreen Cemetery. New York sculptor Eli Harvey at a cost of about $2,000.00 cast this beautiful statue. Over 300 members attended the dedication along with the famed Elks.

In 1918, the U.S. had entered World War I, and Lodge #309 was quite active during the conflict. Many members served honorably in the armed services, and at home were devoted to aiding the war effort. At the direction of the Grand Lodge, every Lodge throughout the nation was requested to assess $1.00 per member to raise one million dollars to build and maintain six base hospitals in France, as well as to equip a base hospital at the University of Virginia for the purpose of taking care of disabled soldiers returning from the firing lines. The Lodge contributed to the war effort both financially and physically and represented the Elk’s creed nobly.

The “roaring twenties” proved to be a busy decade for Lodge #309. In 1921 the Lodge held a Christmas party for the children of Colorado Springs. Over 1000 children were invited and attended. Rush Holland appeared upon the scene again at this time. As P.E.R. of Lodge #309 as well as G.E.R. and P.G.E.R., he became involved in national politics. He was appointed to the position of assistant Attorney General of the United States.

In May of 1963, Lodge #309 (at the corner of Cascade and Bijou) was closed. The Lodge had met there for more than 60 years. The new location was 3400 North Nevada Avenue (present location). It was reported in October 1972, the Trimble Fund, established in 1933, was exceeding all expectations. Those funds had provided many indigent residents of El Paso county with aid for obtaining glasses, food and milk, and dental services, as well as many other services. Monthly aid had reached a total of $44,425.00, while total expenditures over the years had reached a phenomenal $1,277,701.00.

January 15, 1977, was the burning of the mortgage of our present home. Three hundred nine (309) tickets were sold and the price of each ticket (a souvenir item) was $3.09 a couple. Lodge #309 of the 1980’s was involved in many activities. Not only charitable in nature but also social as well. Membership increased greatly, and the Lodge was probably as healthy and profitable as it had ever been. As we embark upon new and uncharted waters for the Lodge, it’s very important to remember our past.