The Arizona Elks adopted the Steele Center in 1992 as a "major project". Members in lodges around the state have contributed more than $6.8 million.

On the sixth floor of the Steele Center research tower, three laboratories were underwritten by the Arizona Elks, and a charter wall lists the specific lodges and individuals who participated in that effort.

Arizona Elks Laboratories for Transplantation Research Amount raised: $275k One of the first projects the Elks undertook was supporting the building of two research labs on the sixth floor of the Steele Center. These labs house researchers who specialize in gastroenterology and nutrition.

Toys, Blankets, Beanies and Booties - Amount raised: "Priceless": There is simply no price that can be assigned to the hundreds of blankets, beanies and booties that have been knitted by the Elks for the premature babies at UMC. Or the thousands of donated toys that have brought a smile to a sick child’s face. We are immensely grateful for these priceless gifts from the Arizona Elks lodges throughout Arizona! 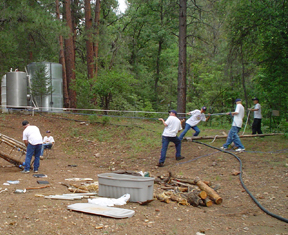 The members of the Arizona Elks Association and its member Lodges have spent a vast amount of time, energy and money to refurbish the camp to benefit the youth of Arizona.