The West Virginia Elks Association has been sponsoring camps for children with disabilities since the mid 1950’s. After three decades of success the camps became the West Virginia Elks State Major Project in 1988. The camp’s mission is to engage campers mentally and physically while also enhancing their social interaction skills, as most campers aren’t afforded these opportunities at home or school. 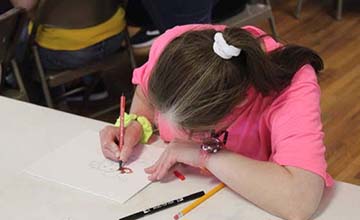 Every year, the Camp Director develops a brand-new camp schedule based on a different theme. Past themes have included the circus, world travel, and other fun educational adventures! Campers take part in the typical camp activities including, arts and crafts projects, cookouts, indoor and outdoor games, swimming, visits from athletes, and a party each evening with Karaoke or a DJ.

At this year’s camp nearly two hundred campers attended over a two-week period in July. Around 65 Elks are involved either directly at the camp, at the Lodge level, or are on the board. On top of that, each of the 19 Lodges in West Virginia are involved in raising funds and supplies for camp throughout the year.

A typical day at the camp starts with breakfast followed by exercise, sports, and arts and crafts. Once the mornings activities are over the campers head off to lunch followed by an afternoon full of fun which usually includes bowling or swimming plus some afternoon rest time. Once they’re rested up, they head off to dinner followed directly by a dance! When asked about what campers enjoy the most, Camp Director, Taffy Robertson said, “They love the night life—music and dancing is one of their favorite activities.” 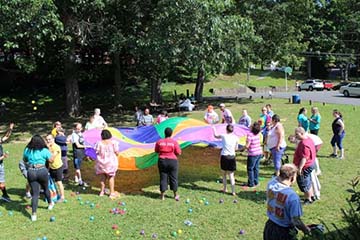 Taffy went on to say, “We had Christmas morning for the first time, and it worked out great! They loved coming in after breakfast in their pajamas and singing Christmas songs and, of course, Santa! Each camper was given a small gift tailored to them individually. One of the campers received a poster of one of his favorite people, he unrolled it and the look was priceless.”

As with all worthwhile things, the only way to keep getting better is to reevaluate what works and what doesn’t. This year was full of a lot of firsts, including changing the location of the camp to be in the same place both weeks. Taffy explained that they’re working on fine tuning some of the issues that come with having the camps back to back as it has been a stressor on some but it’s what works best for the children. She explained that, “It’s a true passion of our volunteers and they continue to work with us to make our camps fun and run smoothly.”