More than 30 local youngsters, many from the Pierre Boys and Girls Club, tried their hand at ice fishing during a recent event organized by the Pierre Elks Club.  Ice fishing and other outdoor activities like broomball were set up for youth to enjoy on February 15, 2019 at Mickelson Pond near Hilger's Gulch in Pierre.  Thanks to Steve Wegman of the Pierre Elks Club for his work to put the event together.   All kids attending caught at least one fish, including perch, bluegill, rainbow trout and even one bullhead.  The City of Pierre provided hot cocoa for attendees, the Elks provided snacks and the SD Game, Fish and Parks Department brought five ice shacks to be put up on the pond ice, along with other supplies.  SDGFP park managers, fisheries staff and conservation officers were also on hand to assist.  Wegman says the kids had a wonderful time and the Pierre Elks Club might bring the event back again next year. 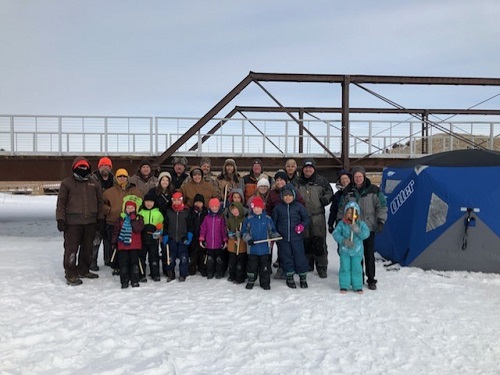