During their time on the West Coast, the scholars volunteered with two service sites: A Safe Place for Youth (S.P.Y.) Community Garden and Harvest Home. 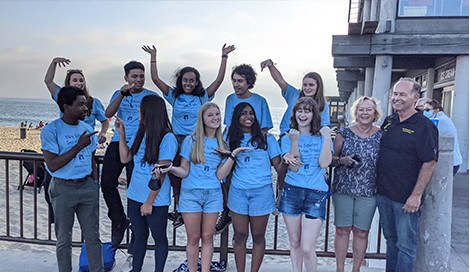 Plus, the scholars got a chance to learn more about the Order and connect with their #ElksFamily; they met Elks from four different Elks Lodges, including Santa Monica, Calif., Lodge No. 906, where they packed care kits for veterans and competed in the first-ever Elks Scholar Olympic Games.

Highlighting the importance of connecting with Elks scholars, Nish Karamuri, a 2019 MVS scholar sponsored by Statesville, N.C., Lodge No. 1823, reflected on the trip. “I applied on a whim, and it was really cool to make the Elks and Elks scholars feel real.”

Speaking of “real,” check out this highlight reel on Instagram.

In the summer of 2021, the Elks National Foundation offered three mini-trips for up to 12 Elks scholars. These trips offer Elks scholars the opportunity to learn about societal issues, serve those in need in the name of the Elks, and connect with your Elks Family from across the country.